A proposed law will fast-track naturalisation of Jews whose ancestors were expelled 500 years ago. Now the descendants of Muslims who were ousted are also seeking the right to return 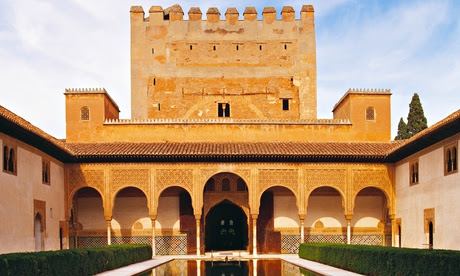 The Alhambra in Granada, Andalusia, was built by Moors beginning around AD889, who officially stayed in Spain for several centuries. Photograph: Shaun Egan/Getty Images

Perched dramatically on a rocky mountain, the small city of Toledo overlooks a bend in the Tagus river. Within its maze of cobblestone streets are buildings that once housed mosques, churches and synagogues, hinting at the varied cultures that once called this medieval city home.
Earlier this month, about 50 miles away from Toledo, the Spanish government sought to strengthen its ties with one of these cultures, announcing plans to fast-track the naturalisation of Sephardic Jews, whose ancestors were expelled five centuries ago from Spain.
The bill, said the Spanish government, would "correct a historical wrong". The legislation has yet to be approved by parliament, but already consulates in Tel Aviv and Jerusalem said they have been flooded with requests for information. Up to 3.5 million people around the world are thought to have Sephardic – Hebrew for "Spanish" – Jewish ancestry.
Now the descendants of another group who figured prominently in Spain's colourful past – before also being expelled – say it's only fair that the same right of return be extended to them.
Shortly after banishing the country's Jewish population, Queen Isabella and King Ferdinand turned their attention to Spain's Muslims, forcing them to covert to Christianity or face expulsion. The Muslims who converted, known as Moriscos, often did so in name only, holding on tightly to their customs and traditions.
In the early 1600s – nearly 120 years after Jews in Spain were told to leave – the Moriscos were also expelled. An estimated 275,000 people were forcibly resettled, the majority of them heading to Morocco, some to Algeria and Tunisia.
Read more: http://www.theguardian.com/world/2014/feb/24/spain-sephardic-jews-islam-muslim

Islam is not a new religion, but the same truth that God revealed through all His prophets to every people. For a fifth of the world's population, Islam is both a religion and a complete way of life. Muslims follow a religion of peace, mercy, and forgiveness, and the majority have nothing to do with the extremely grave events which have come to be associated with their faith.