Muhammad and the Death of Kinana ibn al-Rabi

The Desperation of a Christian Islamophobe


This is ludicrous. OK so it's becoming common knowledge that the anti-Muslim brigade who make the claim that Prophet Muhammad (p) tortured Kinana is based on a non valid source (i.e. it's something that traditional Muslim scholarship and scholarly methodologies have never accepted) as the 'story' is baseless in that it has no narration and no source to it. Of course if you're one of those unscrupulous people who believes anything you may accept it but if you are a person of discernment and scholarship (regardless of whether you are Muslim or not) you are not going to accept it.


Also even if one was not to know the invalidity of the story about Kinana being tortured one would find it highly suspicious as Islam forbid torture as per the explicit Prophetic teaching about the prohibition of torture:


Hadith - Islam does not allow torture 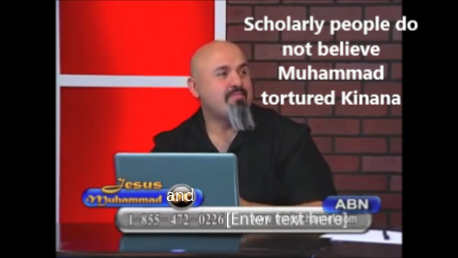 OK so there may be a bit of confusion. People may be thinking, why s it written in a Muslim book if this is a false story. The truth is there are many false stories and stories without any validation written down by the early biographers. The key here is, it's for people to discern what is valid and what is invalid using the classical methodology which Muslim scholars have used for centuries. Biography writers such as Al Tabari acknowledged that they merely reported what they heard and that they in no way shape or form stand by any falsehood therein:


Hence, if I mention in this book a report about some men of the past, which the reader or listener finds objectionable or worthy of censure because he can see no aspect of truth nor any factual substance therein, let him know that this is not to be attributed to us but to those who transmitted it to us and we have merely passed this on as it has been passed on to us."


See here for more on this and Ibn Ishaq here

I want to just show you the tacit acknowledgement (on the part of a CHRISTIAN Polemicist)  that this story of 'torture' is indeed not to be accepted. Oh and in the process I will highlight his desperation in his exchange with the excellent Muslim Apologist Bassam Zawadi.


So Bassam Zawadi scolds a Christian polmecist for making the claim of torture based on the 'story' in Ibn Ishaq. Bassam Zawadi points out the story is invalid as it has no source:

Having left and settled at Khaibar, the Banu Nadir started hatching a wide-spread conspiracy against Islam. Their leaders, Sallam Ibn Abi-al Huqauaiq, Huyayy Ibn Akhtab, Kinana al-Rabi and others came to , met the Quraish and told them that Islam could be destroyed." (Allama Shibli Nu'Mani, Sirat-Un-Nabi, volume II, p 106)

This goes to show that Kinana was a war criminal. Let's read on...

The whole truth in the story is that Kinana was put to death. But it was not for his refusal to give a clue to the hidden treasure. He was put to death because he had killed Mahmud Ibn Maslama (also Muslima). Tabari had reported it in unambiguous words: " Then the Holy Prophet (Peace and blessings of Allah be upon him) gave Kinana to Muhammad Ibn Maslama (Muslima), " and he put him to death in retaliation of the murder of his own brother, Mahmud Ibn Maslama (Muslima)."

In the rest of the report, both Tabari and Ibn Hisham have quoted it from Ibn Ishaq, but Ibn Ishaq does not name any narrator. Traditionalists, in books on Rijal, have explicitly stated that Ibn Ishaq used to borrow from the Jews stories concerning the battle of the Prophet (Peace and blessings of Allah be upon him). As Ibn Ishaq does not mention the name of any narrator whatsoever in this case, there is every likelihood of the story of having been passed on by the Jews.

That a man should be tortured with burns on his chest by the sparks of a flint is too heinous a deed for a Prophet (Peace and blessings of Allah be upon him) who had earned for himself the title of Rahma'lil Alamin (Mercy for all the worlds). After all, did he not let the woman who had sought to poison him go scot free? Who would expect such a soul to order human body to be so burnt for the sake of a few coins.

As a matter of fact, Kinana Ibn Rabi Ibn al-Huquaiq had been granted his life on the condition that he would never break faith or make false statements. He had also given his word, according to one of the reports, that if he did anything to the contrary, he could be put to death. Kinana played false, and the immunity granted to him was withdrawn. He killed Mahmud Ibn Maslama (Muslima) and had, therefore to suffer for it, as we have already stated on the authority of Tabari." (Allama Shibli Nu'Mani, Sirat-Un-Nabi, volume II, p 173-174)

His hunt and appeal to the Hadith in Sunan Abu Dawud shows the tacit admission that nobody of discernment and scholarship would accept the 'story' of torture in Ibn Ishaq (hence why the Christian desperately and misleadingly appealed to another Hadith):


Finally, and more importantly, one particular hadith provides substantiation that the torture of Kinana over the treasure actually happened:


And after he posted it he said:


Thus, we have one of the most trusted collections of hadiths corroborating this story of Muhammad torturing and killing Kinana for withholding information regarding the whereabouts of the money purse.


Shamoun [the name of the desperate Christian], the King and Master of everyone who has a reading comprehension problem said the above statements after reading the following hadith:


The Prophet fought with the people of Khaybar, and captured their palm-trees and land, and forced them to remain confined to their fortresses. So they concluded a treaty of peace providing that gold, silver and weapons would go to the Apostle of Allah (peace_be_upon_him), and whatever they took away on their camels would belong to them, on condition that they would not hide and carry away anything. If they did (so), there would be no protection for them and no treaty (with Muslims).


They carried away a purse of Huyayy ibn Akhtab who was killed before (the battle of) Khaybar. He took away the ornaments of Banu an-Nadir when they were expelled.


The Prophet (peace_be_upon_him) asked Sa'yah: Where is the purse of Huyayy ibn Akhtab?


He replied: The contents of this purse were spent on battles and other expenses. (Later on) they found the purse. So he killed Ibn AbulHuqayq, captured their women and children, and intended to deport them. They said: Muhammad, leave us to work on this land; we shall have half (of the produce) as you wish, and you will have half. The Apostle of Allah (peace_be_upon_him) used to make a contribution of eighty wasqs of dates and twenty wasqs of wheat to each of his wives. (Sunan Abu Dawud, Book 19, Number 3000)


There you have it folks. It's all about scholarship and discernment. If you are willing to be fair, use discernment and be scholarly you will be OK but if you are going to go the opposite way you will end up being duped by Anti-Muslim polemicists who have little knowledge and even less regard for the truth.


Good sites to check when you come across something on the internet about Islam which you are unsure of: