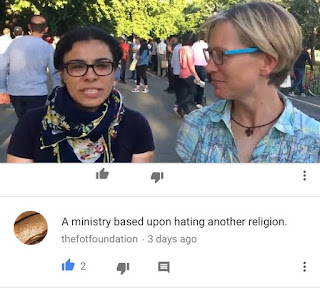 Christian missionaries are shamefully using a possibly distorted statistic related to domestic abuse in Turkey to promote Christianity. It's a case of simplistic handling of stats and simplistic thought patterns.

The missionary group makes out 86% of Turkish women are abused domestically (highly likely this is conflated with spousal abuse which we will see later). The Christian missionary propagandist holds Islam responsible for this and then concludes the whole “country needs Christ”.

The missionary propaganda omits the fact that the Prophet Muhammad never beat any of his wives and that wife bashing can lead to an annulment of marriage according to Mufti Ismail Menk, listen to the qualified Muslim scholar on the subject clarifying the Quranic and Islamic position on the subject of wife beating at the end of this article.

As for Turkey and domestic violence, it appears there may have been some misreporting taking place through shock headlines. I’d image the Christian missionary got the statistic from an Israeli news source which stated:

A new study conducted by the Turkish Ministry of Family and Social Policies revealed that no fewer than 86% of Turkish women have suffered physical or psychological violence at the hands of their partners or family, and pursued legal proceedings afterwards. [Israel National News]

Israel National News, stated in turn, that they got the statistic from Hurriyet Daily News. It becomes quite clear the headline statistic of 86% is quite misleading as it includes psychological as well as physical violence. In addition, the physical violence was not all spousal as it included family members (including in-laws?) and neighbours along with partners (spouses).

So clearly it is misleading to put that type of headline out there. In fact, another source on domestic violence in Turkey specific to husband-wife abuse states the figure to be 40%:

Four out of 10 women in Turkey are beaten by their husbands, according to the recent study entitled "Domestic Violence against Women in Turkey,” which has collected the first official statistics on this topic in Turkey. [Source]

Interestingly enough, 40% is pretty much on par with the respective statistics coming out of the USA.
More than 31 percent of women in the United States have been physically abused by an intimate partner at some point in their lives, according to the Centers for Disease Control and Prevention. [Washington Post]

Now America is a Christian country which the missionary probably thinks has “Christ” yet there may be no significant difference between Turkey and the USA in the prevalence of domestic violence. A complete deflation of the slogan, they "need Christ"!

However, let’s look at other Christian countries which “have Christ” according to missionaries. Uganda, with a Christian population consisting of over 80%,  has a huge domestic violence problem:
A study conducted by ActionAid found that up to 70% of Ugandan women over 15 years of age had experienced physical or sexual violence. This report also found that in 2013 up to 360 deaths were due to domestic violence and out of the 1,042 rape cases reported, only 365 suspects were arrested. [Source]

For our Christian missionary friends this is a theological problem as well as Christian communities are considered (by Christians) to be “in Christ” and “indwelt by the Holy Spirit”. CS Lewis in Mere Christianity explains what Christians mean by the term “in Christ”:

“...they mean Christ is actually operating through them; that the whole mass of Christians are the physical organism through which Christ acts – that we are His fingers and muscles, the cells of His body”

This will be a theological issue for Christian missionaries. How can a society which "has Christ and the Holy Spirit” purportedly acting through it be producing such domestic violence figures in Uganda?

How about South Africa, a population which consists of almost 80% Christian? It’s not much better than Uganda:

A study conducted by the World Health Organisation in 2012 found that 65% of women in South Africa had experienced spousal abuse a year before the research was conducted. The study also showed that their partners always or sometimes used alcohol before the assault. [Source]

Westernised Christians will think Christianity forbids wife beating but is that more due to Westernisation or due to Biblical exegesis? Clearly there have been Christians in the past who did think wife beating was allowed, many of them!

Both the Hebrew Bible and Christian Scriptures contain story after story of violence against women: e.g. Dinah (Genesis 34), Tamar (2 Samuel 13), the Levite's concubine (Judges 19), Jephthah's daughter (Judges 11), Vashti (Esther 1), Suzannah (Daniel 13), and probably the persistent widow in Luke's Gospel (Luke 18) 2 . Later Christian texts also condone male violence against women and the domination of women. For example, the right of chastisement was the enforcer of women's subordination in marriage.

In the "Rules of Marriage" compiled by Friar Cherubino in the 15 th century (Bussert, 1986) we find the careful instruction to a husband to first reprimand his wife; "And if this still doesn't work . . . take up a stick and beat her soundly . . . for it is better to punish the body and correct the soul than to damage the soul and spare the body" (p. 13). Unfortunately, this doctrine has been viewed as consistent with scriptural passages interpreted to confirm male dominance over women: "Wives be subject to your husbands as you are to the Lord. For the husband is the head of the wife just as Christ is the head of the church, the body of which he is the Savior. Just as the church is subject to Christ, so also wives ought to be, in everything, to their husbands" (Ephesians 5.22-24 NRSV).

Either by its silence or its instruction, the church has too often communicated to battered women that they should stay in abusive relationships, try to be better wives, and "forgive and forget." To batterers, it has communicated that their efforts to control their wives or girlfriends are justified because women are to be subject to men in all things. They have been permitted to "discipline" their wives and their children all for the "good of the family." Christian history is filled with examples of church leaders justifying abuse of women by men. Church fathers like Martin Luther unapologetically described their own physical violence towards their wives (Smith, 1911).
[Violence Against Women and the Role of Religion Rev. Dr. Marie M. Fortune and Rabbi Cindy G. Enger]

Interestingly enough, evangelical Christians come from the reformation tradition, a tradition which was sparked by Martin Luther yet he did not condemn wife beating:

Although he disapproved of wife-beating, he did not categorically condemn it if no other means of discipline sufficed. [p13 of Luther on Women]

In the mid-19th century, the Reverend Mr Bird considered it was the “Law of God” to allow a husband to beat his wife (in this case she was beaten for not going to church to hear Mr Bird!) [Newspaper clipping]

The Christian masses over here in the UK considered it to be a right to beat their wives:
During the 1800s wife beating was extremely common and only caused outrage if it was exceptionally brutal or endangered life. There was a widespread belief among ordinary people, male and female, that it was every man's 'right' to beat his wife so long as it was to 'correct her' if she did anything to annoy or upset him or refused to obey his orders. The editor of the Hull Packet (7 Oct 1853) remarked that wife-beating was 'being accepted as the habit of the nation'. The phrase 'a stick not thicker than his thumb' was often bandied about. [History of Women]

For hundreds of years husbands have cited an old Common Law (i.e. a law created by precedent or custom, not statutory or written law) that made it legal for them to beat their wives for various 'offences' such as lack of obedience to him. Various sources say that it was indeed once included in Common Laws or England, Wales and Ireland. [History of Women]

Again, this causes theological issues for Westernised Christians. If they truly believe Jesus and the Holy Spirit are with Christians and wife beating is wrong, then why was wife beating so common and even seen as allowed according to Christianity by so many for so long?

The same applied in mainland Europe and amongst the early settlers in American so we have two continents of Christians who saw wife beating as a right of the husband.

In Europe, squires and noblemen beat their wives as regularly as they beat their serfs; the peasants faithfully followed their lords’ example. The Church sanctions the subjection of women. Priests advise abused wives to win their husbands’ good will through increased devotion and obedience. The habit of looking upon women as a species apart, without the same feelings and capacity for suffering which men possess, becomes inbred during the Middle Ages. In a Medieval theological manual, a man is given permission to “castigate his wife and beat her for correction…”

...Bernard of Siena suggests that his male parishioners “exercise a little restraint and treat their wives with as much mercy as they would their hens and pigs.”

Early settlers in America base their laws on old English common-law that explicitly permits wife-beating for correctional purposes. However, the trend in the young states is towards declaring wife-beating illegal. One step towards that end is to allow the husband to whip his wife only with a switch no bigger than his thumb. [Source]

Mufti Ismail Menk on wife beating [from the 1min timeframe]

Our extremist Trinitarian Christian friends who are into propaganda against Muslims and Islam may want to think how you can talk about domestic abuse whilst believing Jesus allowed the severe beating of female slaves as long as they got up after a day or two:

“If a man beats his male or female slave with a rod and the slave dies as a direct result, he must be punished, but he is not to be punished if the slave gets up after a day or two, since the slave is his property.” [Bible: Exodus 21:20-21]

I hope Beth Grove and Sarah Foster can learn from this piece too.

A Reputation for Rudeness Is Difficult to Shake Off, Ask Pfander...