2a Hinduism - origins and social structure - India and defining "Hinduism

India is the homeland of Hinduism. The terms Hindi and Hindu have historically, at some point, referred to people from India regardless of their faith. Nowadays, Hindu tells you what religion somebody is and Hindi is referred to a language.

The term Hinduism is thought to have been coined by a British scholar in the early 19th century. It’s a term used, by the British, for non-Muslim Indians. Before the British, there was no word for this religious tradition/s. People of India enthusiastically adopted this term to describe themselves. The British at the time generally regarded traditional religions as paganism and backward.

Working definition of Hinduism: The religious traditions indigenous to the Indian subcontinent, not including Sikhism, Buddhism or Jainism.

In 1955, the Indian supreme court relating to marriage laws considered Buddhists, Sikhs and Jains as Hindus. Although most people from those traditions would disagree. 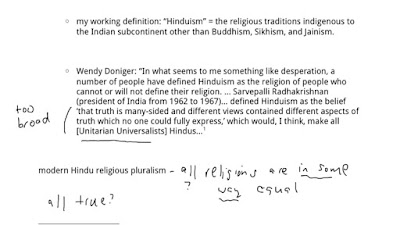 Modern Hindus are mostly committed to some version of religious pluralism. The evaluative claim that all/most religions are equal/true to certain degrees. Most modern Hindus would say other religions are fine (all paths lead to the same mountain) but at the same time they do think Hinduism is superior.

Ancient history of the Indian subcontinent is still unclear. There is a standard story in most text books: the theory of the Aryan invasion. Sometime between 2500-1500 BCE the Aryans (meant something like noblemen or landlords) took over the Indus valley civilisation (around the Indus river) and eventually pushed all the way into India and Aryianised the culture. The Aryans seemed to have their own pantheon, their religious tradition was similar to that of ancient Persia. Some scholars are sceptical of this standard story. Perhaps the Indus valley civilisation collapsed due to an ecological disaster. No temples have been found in their excavations around the region though. The written language of the Indus valley civilisation has not been decoded so much is to be learned. There’s a theory that the Aryans may have migrated into the area rather than entered via an invasion.

Hinduism does not have an official creed thus it contains people who would be described as monotheists, polytheists, atheists, pantheists, agnostics and so one. There’s some commonalities between the strands of Hinduism such as the belief in Brahman.

Hinduism teaches people can be classified into four colours (Varnas). This is not a racial classification but of ritual purity.

Not everybody has a Varna. There are outcasts, people without a class. The Chandalas (also called untouchables, dalits which literally means “broken”). This group is as the bottom of the social totem pole.

This is a simplification. It’s actually more complicated than this and there are regional variations

Traditional Hindus (particularly those in the higher castes) argue these distinctions were given by God and nature.The traditional justification for this caste system ties in with reincarnation and karma. Belief in karma and reincarnation is the idea that the universe is set up so that if you behave well you come back in a better next life, if you’re bad you will go down in scale (maybe even become a lower caste or animal). The justification is that people are getting what they deserved – based on previous life actions. Another justification for their four-part Varna system is in their scripture (Baghavad Gita 4.13) – Vishnu is thought to have set it up. 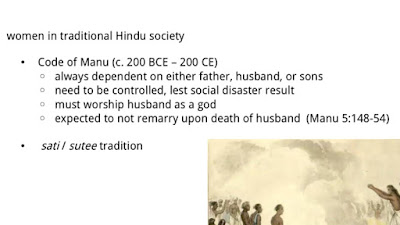 Place of Women in Hinduism

In chapter 5 in particular, women are made dependent on men in their society. They are commanded to worship their husband as they worship a god, they have to have a reverence for their husbands. They are expected not to remarry upon the death of the husband.


How Lawrence Krauss Has Misled Atheists