I am writing to apply to join DCCI Ministries. I have a ton of great ideas to move this new project forward in the right direction through my marketing, and multi-media abilities.

Look dear, let’s cut to the chase, your organisation needs me!

Firstly what we need to do is tweak the name of the organisation: Defend Christ Critique Islam. It sounds Jay Smithy. Almost like he named it for you. So, out goes foreign interference in our company. We’ll name our own companies, thank you very much Jay! 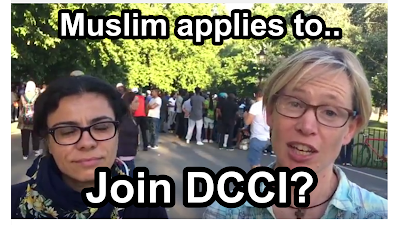 We need to stick with the “Defend Christ” bit. I like that bit.

As you know, there are a number of people (mainly folks with American accents) accusing Jesus of allowing the severe beating of female slaves (Ex 21:20–21), allowing the burning of priest’s daughters (Lev 21:9), ordering the killing of women and children (1 Samuel 15:3), he allowed abortion, Jesus will kill all Muslims on his return, etc..

These people are large in number, quite vocal and they carry a book called the Bible with them which they interpret through a later church doctrine called the Trinity.

Clearly Jesus Christ needs defending against their claims. I don’t believe any of those strange claims about Jesus above, do you? I can’t wait to get working for DCCI Mnistries…rolls up sleeves!

We’ve got to tweak this “Critique Islam” business.

Lizzie Schofield and yourself are reeling from that stint where Jay Smith had both of you badger some Muslims in a park and look rude, ignorant and embarrassing.

Let’s change it to “Critique Islamophobes”. We can do similar to what Rebel Media does with that…erm… Islamophobe Tommy Robinson. I’ll send both of you out to shove a camera and mic in the face of a different Islamophobe in Britain each week. Harass him/her and get all the tough questions in. We can do the same for people who believe things like Jesus allowed the severe beating of female slaves too (warning you may have to be adept at getting past church security). We’ll post the footage online each week.

Look at that, my first 30 mins on the job and I’ve revolutionised the organisation from the ground up. It’s amazing what a savvy person can do for any organisation (definitely beats the old stale stuff that was being trotted out by the brains at Pfander Ministries, go on ladies feel free to have a chuckle at your former bosses…I won’t call you disgruntled ex-employees..promise!)

I’ll do all the blogging too. I’m super keen, aren’t I? What was that Hatun? What, Lizzie is doing the blogging? Nay worries, let her work on something else. I’ve got another idea (Ahh this new guy is boss, ain’t he full of smashing ideas and enthusiasm?). What we’ll do is have two wings to the organisation.

If we truly want to professionally Defend Christ and Critique Islamophobes at DCCI Ministries we need some paper. No, Hatun, not the newspaper (was that the Sun you just pulled out? Smh.). We need some cash. Green. Funds. Dollars. Pounds. You know, the stuff Jay Smith was rolling in!

We’ll run another wing of DCCI Ministries. This wing will stand for Delicious Cup Cakes International (DCCI). I’m confident Lizzie is a dab hand at baking. Bet she loves being in the kitchen. Let her bake a load of cupcakes each week and we’ll sell them to raise funds for the main project. Between you and I, she isn’t the best writer working for DCCI Ministries. It’s me. She writes like VI Lenin. You ever read some of his work? Probably not eh? There’s no change of pace, it’s turgid, it’s er..er..let me draw it out for you…think about reading a transcription of a Jonathan McLatchie talk. You get the picture. Zzzzzzz.

PS Thanks for the job. We can discuss pay later. Just so you know, I’m not willing to get paid in rice crackers.

PPS Your first gig for DCCI Ministries is to target an old Islamophobe operating at Speakers Corner in Hyde Park this Sunday. He’s called Jay Smith, you’ll see him on a ladder yelling about Muslims and Islam from 15:00. I think you may scare him off into retirement when you turn up to grill him!

PPPS Can I have your head sizes? I’m thinking of getting a sponsorship deal in. A hijab company may be willing to sponsor you. Can you imagine that, the pair of you wearing hijabs whilst tracking down Islamophobes and giving them what for every week? 1sec, Hatun I just got a new email. It’s only Nike, they want to sponsor you with Nike Sports Hijabs!