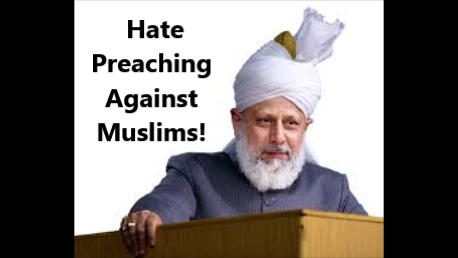 Apparently Mirza Masroor Ahmad said this about people who do not accept a man called Mirza Ghulam Ahmed (1835-1908 CE):

“...rejection of the Imam of the age in itself takes one to the satanic abyss and one who is taken in by satanic temptation cannot have any connection with the Gracious God. To follow the Satan is in effect to worship him.”

Look, I don't have any regard in accepting this person called Mirza Ghulam Ahmad, who is said to have declared himself to be the Mahdi and the Promised Messiah.

Come on, does Mirza Masroor Ahmad really expect people to believe that the Messiah and the Mahdi have come and gone. Mirza Masroor Ahmad is the leader of this small group/cult. I'd imagine their numbers are dwindling as more and more people have access to proper Islamic education.

Guys just follow Islam as it's meant to be followed. No need to add this Mirza Ghulam Ahmad character onto Islam. Pop over to a street in Cairo, Jeddah or Sana'a and ask who this fella was - you'd be hard pressed to even find somebody who has even heard of him.

Give it up folks. And stop hate preaching against people who just aren't duped by this Ahmadiyya movement.

Refutation of Ahmadiyya, Must Watch For Ansar Raza and Ahmadis

Ahmadiyya And The Muhammadi Begum Allegation

On the 26th of June 2011, the Ahmadiyya leader Mirza Masroor Ahmad banned Ahmadis from using Facebook. All accounts had to be deleted immediately, so much for “Freedom of Speech”.

Muslims are free to use Facebook or any other social network as they see fit. There isn’t, and probably never will be a centrally controlled singular Facebook group for Islam or Muslims as there is for Ahmadiyya.

After the death of Mirza Ghulam Ahmad Qadiani in 1908, he was succeeded by his friend Hakeem Nooruddin.

He was the first Khalifahtul Masih which means the “Successor to the Messiah”. After his death in 1914, the son of Mirza Ghulam Ahmad, Basheeruddin Mahmud became the Khalifatul Masih.

The current leader as of 2003 is Mirza Masroor Ahmad who is the great grandson of the founder of Ahmadiyya, Mirza Ghulam Ahmad Qadiani.

The Ahmadiyya Movement claims to be a sect within Islam, although it holds beliefs which the Muslims believe are outside the boundary of Islam. The Movement was started by its founder, Mirza Ghulam Ahmad of Qadian, India, in the late 19th century. Mirza Ghulam Ahmad claimed to be a Reformer (Mujaddid), the Second Advent of Prophet Jesus (as), the Imam Mahdi and the Second Advent of the Holy Prophet Muhammad (Peace be upon him). We examine details of these claims in 'The Evidence' section.