Naomi Wolf: Hijab and Veil Does not Suppress Women

I've been through Naomi Wolf's The Beauty Myth and it was quite insightful into learning more about how the West operates in destroying women's self esteem so much so that they become consumers of not only copious cosmetics but also cosmetic surgery. 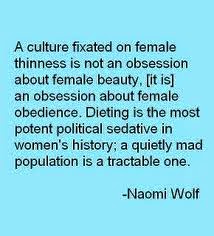 Naomi Wolf is an American feminist who does not espouse negative views on the Hijab as she, rather than swallowing Western post 9-11 propaganda, has actually visited Muslim countries and spoken to Muslim women about such topics.

Naomi Wolf (in red, quotes taken from The Sydney Morning Herald) contrasts the Muslim woman dressed according to Islam with skimpily clad non-Muslim women in Europe and North America. She does suggest this represents the discomfort the Christian/Secular West has with Muslims.

A woman swathed in black to her ankles, wearing a headscarf or a full chador, walks down a European or North American street, surrounded by other women in halter tops, miniskirts and short shorts. She passes under immense billboards on which other women swoon in sexual ecstasy, cavort in lingerie or simply stretch out languorously, almost fully naked. Could this image be any more iconic of the discomfort the West has with the social mores of Islam, and vice versa?

Think about it, the blunt truth in comparisons such as these is that nobody wants to be told the women of their tradition don't value themselves relative to another to those of another tradition. Perhaps Western societies do feel this is what Muslim women dressed according to Islam are effectively intimating? Perhaps this is behind France's ban on the hijab? Perhaps the cosmetics and fashion industry don't want the Hijab to become popular in the West as it means women will be more inwardly happy and thus less inclined to buy cosmetics, cosmetics procedures and the latest outfit worn by Victoria Beckham or Kim Kardashian? Perhaps corporations which are so influential in the capitalistic West feel threatened by Muslim women dressed according to Islam as they fear it will encourage the consumers of  cosmetics and fashion to eschew such in favour of  Islamic dress.

Ideological battles are often waged with women's bodies as their emblems, and Western Islamophobia is no exception. When France banned headscarves in schools, it used the hijab as a proxy for Western values in general, including the appropriate status of women. When Americans were being prepared for the invasion of Afghanistan, the Taliban were demonised for denying cosmetics and hair colour to women..

Are Western non-Muslims blind to the oppression and pressure to conform to a certain look Western women are under?

Naomi Wolf offers some though provocation for Western readers who don't understand Islam:

But are we in the West radically misinterpreting Muslim sexual mores, particularly the meaning to many Muslim women of being veiled or wearing the chador? And are we blind to our own markers of the oppression and control of women? 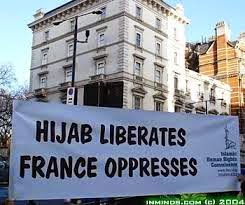 As I have lived in the West all my life I can testify to the blindness of  my fellow Brits when it comes to the tools of oppression used against Western women. How many of my fellow countrymen and women would even deign to think magazine covers with airbrushed models s actually a form of oppressing and destroying the self esteem of women here in the West? You really ought to read Naomi Wolf's The Beauty Myth if you cannot see how this is the case.

Feminist author: Hijab and Niqab (veil) do not suppress or repress women's sexuality!

Naomi spells it out quite clear here, the Western Ismaophobic propaganda of oppressed women in Muslim lands due to veiling is far, far from the truth. How does she know? Well she actually visited Muslim countries and spoke to Muslim women

The West interprets veiling as repression of women and suppression of their sexuality. But when I travelled in Muslim countries and was invited to join a discussion in women-only settings within Muslim homes, I learned that Muslim attitudes toward women's appearance and sexuality are not rooted in repression, but in a strong sense of public versus private, of what is due to God and what is due to one's husband. It is not that Islam suppresses sexuality, but that it embodies a strongly developed sense of its appropriate channelling - toward marriage, the bonds that sustain family life, and the attachment that secures a home.

So here we have Naomi, perhaps the most famous feminist author on the planet stating categorically that Islam does not suppress or repress Muslim women's sexuality!

Naomi Wolf just knocked Western propaganda about Muslim veiled and hijabi women out of the park. Way to go Naomi!!!

Veils and Hijabs are a sign that women value themselves

Outside the walls of the typical Muslim households that I visited in Morocco, Jordan, and Egypt, all was demureness and propriety. But inside, women were as interested in allure, seduction and pleasure as women anywhere in the world.

At home, in the context of marital intimacy, Victoria's Secret, elegant fashion and skin care lotions abounded. The bridal videos that I was shown, with the sensuous dancing that the bride learns as part of what makes her a wonderful wife, and which she proudly displays for her bridegroom, suggested that sensuality was not alien to Muslim women. Rather, pleasure and sexuality, both male and female, should not be displayed promiscuously - and possibly destructively - for all to see.

So Naomi Wolf learned that Muslim women (and men) don't want to display their sexuality and sexual pleasure publicly and promiscuously. This actually goes back to Anne F Downs comments and advice surrounding the chatter around a female celebrity appearing nude on the front cover of a magazine. According to her acts such as displaying nudity for all to see is devaluing oneself:

"We are worth more than this. While the human body is beautiful, this particular display does not add to or celebrate the value and strength of her as a woman. These photographs are not a great reflection of the worth of a woman."

It's interesting to note a world renowned feminist author is actually supporting Muslim women and the Hijab. Great. I just hope and pray this type of thoughtful approach becomes widespread. Women al over the world need to be veered away from this false notion of conservative dressing is oppression. The true oppression is the media machine of the corporations which destroy the self esteem of women based on their looks and body shape so they can sexualise them through expensive fashion, cosmetics, dieting and cosmetic surgeries.

The other interesting thing here is, a lot of Christian Islamophobes abound who rattle off the same Western propaganda which Naomi Wolf has destroyed. These Christians clearly have not looked into the teachings of Christianity and the head covering (according to Christianity women should value themselves more and dress more modestly):

Christian Women Without Hijab are Temptresses to Angels - Paul (?)