One of the frustrating things about apologetics is the sheer misinformation that gets banded about on the internet by apologists and speakers who really should know better. Folk who just present anything that they feel suits their position without trying to check the veracity of the claims. Dr Nabeel Qureshi has a history of this. Nabeel is no expert in Islamic or Quranic studies. As far as I know, he's a medical doctor who does not even know Arabic.

Here's a video in which Nabeel Qureshi is claiming (ignorantly) that Ibn Masud (Ibn Masood) did not believe Surah al-Fatiha was part of the Quran despite having been corrected on this issue in past. Watch this video to see Nabeel Qureshi corrected and rebuked for his misinformation at Biola University.


If the video does not play, please see:
https://www.youtube.com/watch?v=TQTLj8XEydY

A point which seems to impugn Nabeel Qureshi's academic integrity and sincerity (again) is that he has already been advised on this argument previously in a debate with Bassam Zawadi.

For some reason Nabeel continues to expose his ignorance, unreliability and insincerity. However, it seems to be getting worse as he just attributes words to Ibn Masud without any references at all - is he making this up or does he have a reference for this?

If Nabeel had checked the Islamic Center for Research and Academics site he would have realised that there is a narration where Ibn Masud confirms that Al Fatiha is part of the Quran!

It is narrated from Ibn Mas‘ood, regarding the word of Allah, ‘We have given you the seven oft-repeated verses;’ he said, “[It is] Fatihah al-Kitab.”[3]

This plainly confirms that the al-Fatihah was indeed a part of the Qur’an in the view of Ibn Mas‘ood just like the rest of Muslims. [See ICRAA.org] 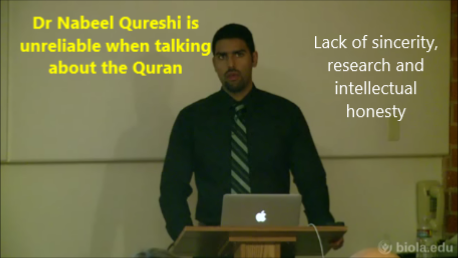 Nabeel has already been told why Ibn Masud did not include Surah Al Fatiha in his manuscript. So why is Nabeel continuing with this line of disingenuous argumentation? Why won't Nabeel not actually take the explanation of Ibn Masud rather than attributing an opposing narrative to Ibn Masud?

It's clear from Ibn Masud himself that Surah Al Fatiha was not written in his manuscript for reasons of brevity:

‘Abdullah bin Mas‘ood was asked as to why he did not write al-Fatihah in his mushaf. He replied, ‘If I were to write I would write it before every surah.’” Abu Bakr al-Anbari explains this saying every raka’ah (in prayers) starts with al-Fatihah and then another surah is recited. It is as if Ibn Mas‘ood said, ‘I have dropped it for the sake of brevity and I have trusted its preservation by Muslims (collectively).’[4]

Thus we learn, if he did not write a certain thing in his mushaf it does not mean it was not part of the Qur’an to his understanding. This is a vital point I will ask the readers to bear in mind. [See ICRAA.org]

On top of this, Nabeel has already been told that the Qiraat (reading)of Ibn Masud contains Al Fatiha:

Ibn Mas‘ood did recite al-Fatihah and al-mu’awwazatayn in Qur’an as proved from rigorous evidence of four established qira’ats whose chains of authorities (isnad) are the strongest chains unanimously accepted by the ummah. [See ICRAA.org]

For a full refutation of the Christian missionary arguments based on Ibn Masud's Codex see:

No. of Surahs in the Mushaf of Ibn Masud

In summary Nabeel Qureshi really does embarrass himself here in effort to evangelize and attempt to bring the Quran down to the level of the Bible vis-à-vis preservation. In the process Nabeel is showing himself to be unscholarly, unreliable and insincere.

Nabeel may well be trying to evangelize to Muslims in order to attract Muslims towards Christianity but surely he must recognise that presentations and claims such as he made at Biola University are only going to repel Muslims away from  Biola University, Ravi Zacharias International Ministries (RZIM) and  Nabeel Qureshi's personal mission.

Nabeel, surely recognises this type of disregard for intellectual honesty and accuracy harms relationships between Muslims and Christians.