FYI: I don't describe myself as Sufi nor Salafi. :)

Would it not be a shame if British Muslims were pitching up on national TV and squandering the voice they were being afforded due to desires to self-promote and/or sectarian reasons?

It would be a dereliction of responsibility and trust for a Muslim to do so in the perilous state British Muslims are in as of now.

This is where Adam Deen of the Deen Institute should be questioned. Did Adam Deen misuse his opportunity on BBC's Panorama? Admittedly, I don't have a TV set, I haven't had one for near on a decade so I was made aware of his appearance on the BBC through the internet. What struck me was how Adam Deen was being used by the BBC as a rent-a-quote character to prop up their agenda - you can decide what their agenda was/is.

However, Adam Deen is not a useful idiot. Sure he sounded foolish to anybody willing to scratch the surface and actually think about matters. This was a symbiotic relationship we witnessed. Both parties were using each other, so no, Adam's not a useful idiot.

The BBC were pushing their agenda but rest assured Adam had an agenda of his own to push:

1. Adam appeared as though he was looking to help proscribe his rivals. His sectarian rivals. For those unaware, British Muslim speakers/apologists along with their respective supporters haven't been shy in getting embroiled in embarrassing and immature spats. Adam Deen and his little gang of sectarian supporters aren't too enamoured with the Salafi iERA so it came as no surprise that Adam Deen would allow his sectarian anti-Salafi views to override the common sense narrative that inculcates foreign policy as a motor behind many forms of terrorism. Adam, sensing the opportunity, used the BBC platform to introduce himself to the nation as a Muslim who follows the Whitehall policy of remaining silent of its complicity in the problem of Muslim terrorism all the while over-playing the role of 'toxic theology' and 'puritanical Islam'. Adam spoke like a true sectarian bigot and the BBC did the rest.

Adam got a result for his narrow-minded cause which puts pressure on Salafis such as Haitham al Haddad, iERA and folk at the Green Lane mosque in Birmingham amongst many others.

These poor Muslims all oppose violence yet the scrutiny is well and truly on them now. Not everybody acts in a fair fashion, isn't that right Adam?

2. Self-promotion. Adam, by design or not, wound up pushing himself as the voice of moderation amongst British Muslims. I mean here he is on national TV condemning a bunch of other Muslims (who I repeat have consistently taught against violence and terrorism) and shoving them under the bus. It's like the guy in the office who makes his colleagues look bad in front of his manager. Office politics. It's hard to get a gig on the Beeb, I guess you don't do your credentials any harm in the quest for further air-time by following a sensationalist agenda and towing an agenda-laden line. Sober talk of unjust foreign policy and disaffected youth through unsavoury socio-economic conditions does not cut the mustard when it comes to sensationalism. People want to see bogeymen. Adam pointed at his sectarian enemies. The BBC producers aren't stupid, they expected him to do so. Predictable. Predictable because they knew of his sectarian bias.


Adam effectively used his platform to settle a few sectarian rivalries, self promote himself (knowingly or unknowingly) as the voice plus face of moderation and to curry favour from the establishment - through hiding the very real and obvious influence of foreign policy on radicalising already-disaffected young men and women.

Now you tell me, how in the world did ANY of Adam's air-time on the BBC help the average Muslim youth in Britain? In fact, it made matters worse for many Muslims as his rampant sectarian bigotry led him to amplify the calls to proscribe and label many Muslim leaders in the UK who are railing against terrorism as 'non violent extremists' following 'toxic theology' and 'puritanical Islam'.

What an absolute disaster Adam was. Adam, next time, do us all a favour and just ask your wife to take your spot or better still just ask them to get real scholars and intellectuals such as Hamza Yusuf and Dr Yasir Qadhi. It's more in the interest of British Muslims. I think I can safely assume the rest of us British Muslims would rather have less testosterone fuelled sectarian bigotry, less self-focus and more wisdom, common sense and cohesion...please!

Adam Deen vs Asghar Bukhari, George Galloway,  Experts (and possibly vs his wife too!!!)


Is 'toxic theology' behind 98% of terrorist attacks, Adam?

When asked about his motive by an eyewitness, ‎one of the men responded, “because he has killed Muslim people in Muslim countries”, “I killed ‎him because he killed Muslims and I am fed up with people killing Muslims in Afghanistan”. He ‎added: “You will never be safe. Remove your government”. What’s more the style of the attack, ‎undertaken and filmed in full public view with the objective of publicising the actions to a wider ‎audience, is reminiscent of a strategy employed by the media savvy loose network, often referred ‎to as Al Qaida. While there is evidence to suggest Michael Adebolajo became radicalised through ‎the now-banned al-Muhijaroun, the group is well known to security services who monitor it closely ‎and it treads a fine line between espousing hate and undertaking violent actions. Though the ‎group may have laid the foundations for a binary and simplistic worldview, it is likely other ‎inspiration was involved in the move to action. [Myriam Francois-Cerrah] 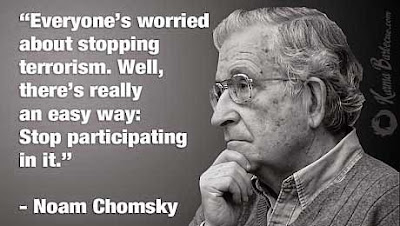 Extremists point to western foreign policy to explain their acts. Why do we ignore them?

Often, the likes of Michael Adebowale and Michael Adebolajo, who used violence to make “points” about the Muslim world in Woolwich, aren’t “religious fanatics”. The trigger we refuse to see is our foreign policy.

Did you know that the alleged ringleader in the 11 September 2001 attacks had originally planned to land one of the hijacked US airliners and give a speech to the assembled press corps? Can you guess what he wanted to rant about, live on Fox News? Seventy-two virgins in heaven? Nope. The need for sharia law? Guess again. According to the report of the official 9/11 commission, Khalid Sheikh Mohammed had intended to “deliver a speech excoriating US support for Israel . . . and repressive governments in the Arab world”.

In the vexed discussion about extremism and radicalisation, foreign policy is the issue that dare not speak its name. Our leaders zealously police the parameters of the debate, pre-emptively warning off those who might dare connect the dots between wars abroad and terror at home.

...Yet establishment figures continue to denounce those of us who cite the radicalising role of foreign policy as (to quote the former US state department spokesman James Rubin) “excuse-makers” for al-Qaeda. To explain is not to excuse. The inconvenient truth for Rubin, Johnson et al is that Muslim extremists usually cite political, not theological, justifications for their horrendous crimes.

Asked by the judge at his trial in 2010 how he could justify planting a bomb in a crowded public place, the “Times Square bomber”, Faisal Shahzad, raised the impact of US drone strikes in his native Pakistan that “kill women, children, they kill everybody”. Umar Farouk Abdulmutallab, the “underwear bomber” who tried to blow up a US-bound airliner in December 2009, told the judge in his trial that he had worn an explosive device “to avenge the killing of my Muslim brothers and sisters” against “the tyranny of the United States”. Then there is Dzhokhar Tsarnaev, the 19-year-old suspect in the Bos - ton Marathon bombings. According to the Washington Post, Tsarnaev “told interrogators that the American wars in Iraq and Afghanistan motivated him and his brother to carry out the attack”. Ah, say the critics, but 9/11 preceded both the invasions of Iraq and Afghanistan and Obama’s drone war in Pakistan. They did – but the west’s support for Israel’s oppression of the Palestinians preceded 9/11. As did the murderous Anglo-American sanctions against Iraq. What did the mastermind of the first al-Qaeda attack on the Twin Towers in 1993, Ramzi Yousef, say at his trial in 1998? “You have [a] so-called economic embargo [on Iraq] which kills nobody other than children and elderly people.” [Mehdi Hasan]

About 20% of British Muslim Women Feel Unsafe in Britain