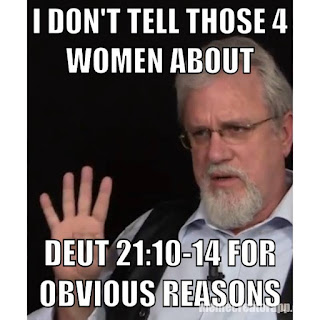 Lizzie Schofield of Pfander Ministries as a Trinitarian believes Jesus allowed Israelites to mistreat captive women by marrying them after killing their fathers, husbands and brothers in battle. Of course she was trying to launch a shallow Jay Smith-esque polemic against Prophet Muhammad's marriage to Safiya (which is discussed here) but nevertheless, if she'c consistent, she will as a Trinitarian believe Jesus allowed something which she believes to be ill-treatment of women:

Deuteronomy 21 (ESV)
10 “When you go out to war against your enemies, and the Lord your God gives them into your hand and you take them captive,11 and you see among the captives a beautiful woman, and you desire to take her to be your wife, 12 and you bring her home to your house, she shall shave her head and pare her nails. 13 And she shall take off the clothes in which she was captured and shall remain in your house and lament her father and her mother a full month. After that you may go in to her and be her husband, and she shall be your wife.


This video is also uploaded here and here

According to the Trinitarian worldview, Jesus: also


~Allowed the severe beating of female slaves as long as they got up after a couple of days [Exodus 21:20]
~Ordered the killing of children, infants and WOMEN [1 Samuel 15:3]

My advice to Lizzie, look why not just accept the Islamic view of Jesus? Do you really want to believe Jesus ordered the killing of women and children and allowed the severe beating of female slaves as long as they got up within a day or two?

I hope Lizzie Schofield, Sharon Hoy, Sarah Foster, Hatun Tash and Beth Grove will reflect on why Jay Smith's Pfander Ministries and Pfander Films has accrued such caustic and extremist anti-Muslim followers over the years. I know Jay's group has been barred from speaking at certain venues and universities in the past due to being seen as Islamophobic.

Why it's Important for Muslims to Continually Condemn Terrorism