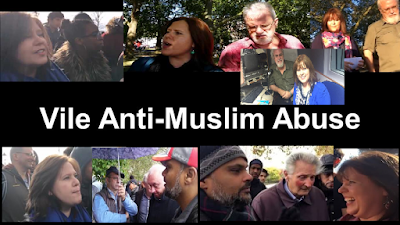 15 Moses said to them, “Have you let all the women live? 16 Behold, these, on Balaam's advice, caused the people of Israel to act treacherously against the Lord in the incident of Peor, and so the plague came among the congregation of the Lord. 17 Now therefore, kill every male among the little ones, and kill every woman who has known man by lying with him. 18 But all the young girls who have not known man by lying with him keep alive for yourselves.

The video deals with her bigoted anti-Muslim abuse. She took exception to the thought rape was of the virgin girls took place. She then angrily lashes out and claims this idea of rape being involved in Numbers 31 of the Midianite virgins is due to a Muslim mentality: "thinking like a Muslim". A vile anti-Muslim comment which she needs to be publicly called out on, hence this post peacefully rebuking her and calling her to publicly apologise.

However, the more observant ones amongst you may have noticed she made no pronouncement on what is apparent in the text: male children and mothers (non virgin women) were killed.

1. She believes Moses is a Prophet and the vengeance against the Midianites was ordered by the Lord (as a Trinitarian this order comes from Jesus in her eyes as he is considered to be the 2nd person of the Trinity doctrine):

1 The Lord spoke to Moses, saying, 2 “Avenge the people of Israel on the Midianites. Afterward you shall be gathered to your people.”

7 They warred against Midian, as the Lord commanded Moses, and killed every male.

25 The Lord said to Moses, 26 “Take the count of the plunder that was taken, both of man and of beast, you and Eleazar the priest and the heads of the fathers' houses of the congregation, 27 and divide the plunder into two parts between the warriors who went out to battle and all the congregation.

2. It would be anti-Semitic to make a similar comment about Jews - something which would receive widespread (and rightful) condemnation from the public and it could get her into trouble with the law of the land. In effect, she's a coward and a bully as she's picking on the minority which is not as well protected when it comes to abuse and discrimination. Sadly, there are a number of Christians who feel they can get away with anti-Muslim comments and sentiment without being called out for bigotry, publicly condemned and reported to the authorities. Muslims have to do more to ensure anti-Muslim abuse is seen as severe and as reprehensible in the eyes of decent people in the UK as anti-Semitism is seen. We can learn from our Jewish friends as they have decades of experience in campaigning against discriminatory attitudes against their people - we should invite Jewish activists to help us with our activism against Islamophobia. Our Jewish friends have a lot of experience and knowledge we can benefit from.

Just to give you an idea of the number of male youngsters and mothers killed here, think about the number of virgin girls and then do the maths:

Verse 35 tells the reader how many virgins there were: and 32,000 persons in all, women who had not known man by lying with him.

For Beth Grove to resort to bigoted ravings at the suggestion the text teaches there was rape one wonders what she does at the thought of the 40,000 boys and mothers being killed....Crickets.

This is typical of your average Christian anti-Muslim bully. Ranting and raving abuse and allegations at Muslims but no consistency and serious-minded thought.

Just to nail my colours, as a Muslim, to the mast. I don't have a belief about this story about Moses. There's no compulsion on me to accept it. I, and the Muslim in the video, do not believe the historical Moses allowed rape of anyone. We don't consider the Old and New Testament reliable.

We must not forget anti-Muslim bigotry attracts other anti-Muslim types. Some of Beth's and Pfander Ministries viewers/followers/supporters/casual observers have been documented in making threatening and racist abuse.

Lizzie Schofield, Sharon Hoy, Sarah Foster, Hatun Tash and Beth Grove will reflect on why Jay Smith's Pfander Ministries and Pfander Films has accrued such caustic and extremist anti-Muslim followers over the years. I know Jay's group has been barred from speaking at certain venues and universities in the past due to being seen as Islamophobic.

The quotes used in the video to show there are other folks out there who think the text in Numbers 31 implies rape, at least one of these other people is a CHRISTIAN.

Emeritus Professor of Statistics at Auckland University, New Zealand and a Fellow of the Royal Society of New Zealand Arthur F. Seber writes:

“God seems to sanction rape. In Numbers 31:17-18 we read that Moses encouraged his men to kill all the boy captives and female captives who are not virgins but keep virgins alive for themselves. God did not rebuke him but urged him to distribute the spoils (verses 25 40).” [1]

In a massive commentary on the Bible, The theologian Claudia Rakel writes:

“The connection between war and the rape of the women of the conquered people is recorded in biblical texts such as Numbers 31, Genesis 34, and Judges 5:30.” [2]

Eminent scholar Professor Carolyn J. Sharp, who is Acting Associate Dean of Academic Affairs & Professor of Hebrew at the Divinity School of Yale University identifies the text in Numbers as an example of a prescription for rape:

“The practice of sexual violation of enemy women for the purpose of long-term destabilization of the enemy is a well-known and amply documented strategy of male warriors in many cultures, from ancient times to today. Scripture testifies to this abhorrent practice in holy-war texts such as Numbers 31:18, in which Moses commands the execution of nonvirgin Midianite women but allows his army to “keep alive for” themselves Midianite virgin girls, and Deuteronomy 20:14, which instructs that enemy women may be taken as booty.”

Professor of Social Ethics and Latinx Studies at Iliff School of Theology in Colorado, Dr. Miguel A. De La Torre, who is also an ordained Southern Baptist minister, readily recognises the plain meaning of Numbers 31:18: “The abolitionists were hard pressed to find any biblical passage that outright condemned the institution of slavery. Even the rape of female slaves found biblical justification and was considered to be ordained by God. Specifically, Numbers 31:18 instructs conquerors as follows: “You shall keep alive all young females who have not had sex with a male for yourselves.” This passage is part of Moses’ instructions for treatment of the conquered people of Midian, who were now to be Israel’s slaves.” [1]
Quotes sourced from Ibn Anwar's article