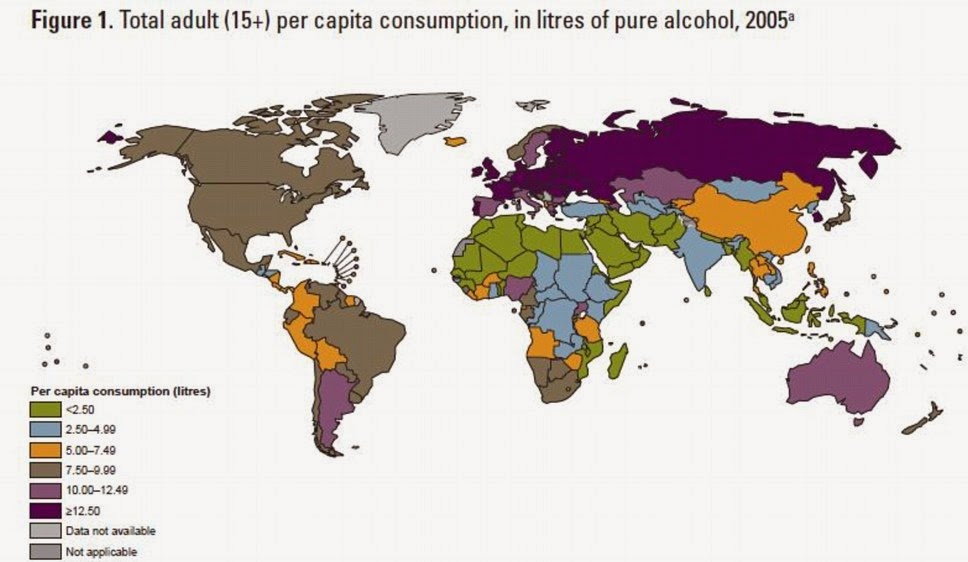 Drinkers: The darkest areas on the map show where people drank more than 125 units of alcohol a year during the study period. The US is comparatively low but not as low as strict Muslim regions

Europe appears to have a higher alcohol consumption than America. Could this be due to the fact that America is more of a practicing Christian nation than many/if not all Western European nations (including the UK)? It could well be.

Wine is a mocker and beer a brawler; whoever is led astray by them is not wise. [NIV 20:1]

According to this verse of the Bible the Americans are wiser than the Europeans based on those statistics. Are they wiser than Muslims? Nope.

According to the Bible verse, Muslims are indeed wise people!

But... Paul Williams agrees with Sammy; how can you refute that?

To be fair to Christians, they believe that their religion can be changed to fit the times; they just "abrogate" their teachings themselves, they don't need revelation to do so

I like how the article correlates drinking with economic development , that is Sammy logic right there

Muslim Responses is a site that is dedicated to refuting the many lies and distortions that have been thrown against the true and noble faith of Islam.

This site seeks to respond to several arguments that have been thrown against the true God Allah, his final prophet Muhammad, and the revelation he was sent with which is the Noble Quran.

We operate according to 8 principles:
1.Clarifying that Islam is the only religion acceptable to God.
2.Clarifying the principles and teachings of Islam so that others may understand what it is about.
3.Declaring Islam’s innocence from the false allegations made about it.
4.Boosting the morale of Muslims who especially live as a minority in countries where missionaries are active in their evangelism.
5.Supporting the stance of Muslim minorities and help them demand their rights.
6.Helping create mutual understanding and encouraging peaceful co-existence with the disbelievers living next to us and to prevent fitnah.
7.Clarifying the reality and truth of other religions through the lens of Qur’an and Sunnah.
8.Inviting the People of the Book to their true original religion and making apparent the corruption which crypt into their books.

Muslim countries full of wise ppl. Europe can learn from Muslim ppl.
Every Friday and Saturday there is lots of trouble in uk cities cos ppl drinking alcohol. Not good.

Why Christians even drink alcoholic drinks?