Why I Will Help Asif Quraishi: How the LGBT Community and TV Directors Misuse Asif Quraishi (Muslim Drag Queens)


OK, my friend messaged me about this Muslim drag queen program to be aired on Ch4. I already know about Asif Quraishi. I'm aware of his work. I've wrote about him previously. 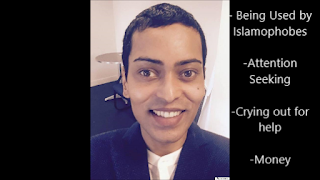 As far as I know they don't do shows on Hindu drag queens, Sikh drag queens, Jewish drag queens or Christian drag queens? Why not? It's because Muslims are in the news nowadays. The media constantly beat us down. There's a demonization campaign against us as well as a campaign to try and get people to call for 'reforming' our religion and our religious outlook (in no way shape or form should we do this - this is our identity and the Western White Liberal world is not going to play a game of superiority over us and tell us what to believe or think!!)

Asif Quraishi (aka Asifa Lahore) is being used by Islamophobes and is also being used by people behind the scenes in TV to court controversy in order to grab a few extra views in an ever more competitive TV audience battle. Does Asif Quraishi know this? I don't know...but he should. Perhaps he should also know that the folk behind the TV show may also be using him as a 'look at this guy' type of thing, where they don't respect him but rather use him as something to look at and perhaps poke fun at such as some of the out-there individuals they used to choose for their Big Brother program. Let's face it, Channel 4 have a history of using people in this way. Some of whom may have had mental problems.

However, perhaps Asif Quraishi knows all this. Perhaps for him it's a bit of a trade-off. He gets used but he also uses the media too. For him he courts attention which means his popularity on the drag queen and gay scene increase which in turns means more revenue (CASH) for him.

But life is not about using people for cash and purposes of popularity. There's more to life than this. Asif Quraishi knows this. Deep down Asif Quraishi is also using this as a cry for help. A cry for Muslims to sit him down and talk to him. Befriend him and rescue him from his current plight of loneliness and life as a pawn for people who want to rinse him for their own ends - be they gay club owners, TV directors, Islamophobes, LGBT rights activists etc. People are using our Asif Quraishi.

He should be incorporated into the Muslim community fully. Away from the cameras and the prying eyes. He should be rescued. He needs Muslim heroes at this time. He needs Muslim friends. Let's befriend him and let's take him to the mosque regularly and get him attending Islamic circles, classes and lectures. Let's help him. This is our duty. Either we try to help him or just leave him to the wolves who are devouring him right now by misusing him for their own selfish purposes.

If there are any  Muslim drag queens, transgender people, lesbians or gays who are looking for a Muslim to speak to please do email me, I will try my best to offer advice and direct you to avenues which can assist you. Muslims are here for you!

What is Islam's view of homosexuality? Dr. Shabir Ally answers

Stop demonizing the LGBT community, there's nothing wrong with them

I am not demonising them. Your abusive and threatening comments will not be approved.