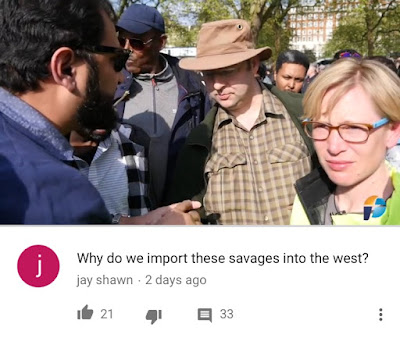 Muslim apologist Ustadh Adnan Rashid  had a debate with a lady who works for Jay Smith’s Pfander Centre for Apologetics, Elizabeth Lizzie Schofield. The debate was on divorce in Islam. Strangely enough Pfander Films do not have the debate video uploaded as I write but they did upload a video entitled After Debate Discussion. I’m not entirely sure why they have not uploaded footage of the debate – one would think the debate footage would be the primary focus. SC Dawah Channel (an excellent and recommended resource for Speakers Corner video  footage) has the entire debate uploaded here: part 1 and part 2.

I recommend you watch the actual debate rather than The After Debate Discussion which was haphazard and was a typical SC dialogue where both sides angled for opportunities to talk. Again, I am a little miffed to see the actual debate has not been posted (yet?) by Jay Smith’s team especially considering Adnan did a good job in clarifying the misunderstanding on the part of Pfander and Lizzie Schofield.


Nevertheless, the After Debate Discussion gave us another insight into the nature of a noxious element of those who follow Pfander Films. The comments on the video were replete with racist abuse and even included a veiled threat towards Muslims. 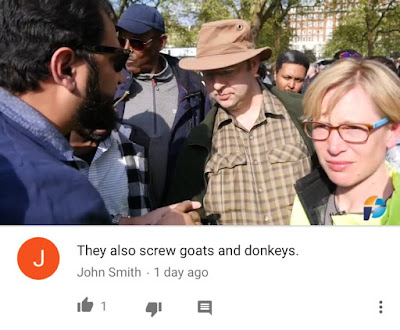 Notice the 21 likes! Calling Muslims savages is a way of saying Muslims are animal-like. Using the word “import” also dehumanizes Muslims alongside otherizing Muslims as folks who are not part of Western society when in reality the majority of Muslims in the West are born in the West. Racists say the same thing about Afro-Caribbean people. They used to, and some still do, say it about Jews. 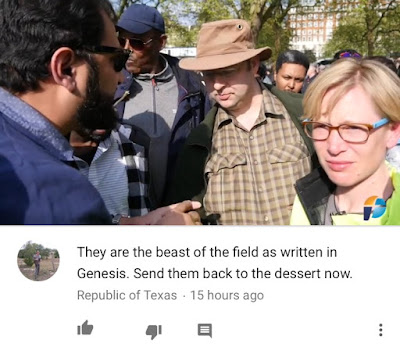 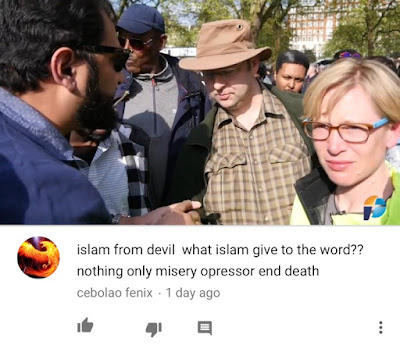 This idea of Muslims following the devil is ridiculous but it aids propaganda in setting up a hierarchy of human value. Of course if you believe a group is satanic then you’re going to be less inclined to care when you read about a bunch of them getting blown up in the news as collateral damage or the target of terrorist thugs. Or even when a group of them drown in the sea while trying to flee war, oppressive regimes and/or economic hardships. On a personal level this attitude hinders one from having a non-pejorative relationship with Muslims in daily life.


What I always find baffling with this accusation from the “Christian” camp is how it opens a Christian up to serious questioning of their own faith tradition and community. For instance, Islam’s zero-tolerance stance on alcohol is better than Christianity’s you-can-drink-as-long-as-you-don’t get-drunk stance; we now know even moderate intake of alcohol is linked to some cancers and alcohol by its very nature is so difficult to control in order to avoid a level of tipsiness which lowers one’s inhibitions (leading to anti-social behaviour or speech) and with each sip it’s incrementally more difficult to avoid complete drunkenness . The question here for a Christian with such a depraved view of Muslims is why are Muslims who you believe to be led by the devil following a religion which has better teachings on alcohol than Christian? It’s a difficult question for the Christian. A related question could be why dopolls show Muslims to be better disciplined sexually than Christians if Muslimsare following the devil? 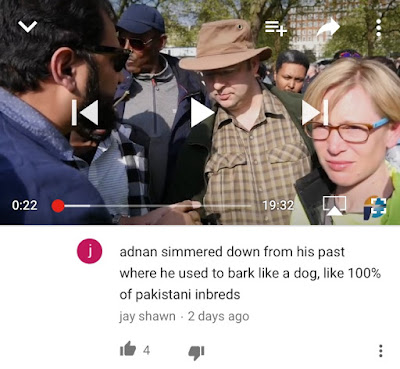 This is an old form of racism: against ethnicity or in this case nationality. Adnan, if I’m not mistaken is of Pakistani origin. This sentiment was clearly not isolated to one individual - 4 likes! 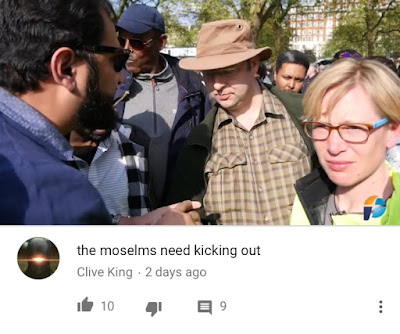 Notice all the likes! Pfander Ministries have previous form here. This is not thefirst time where one of their viewers expressed views in wanting to boot Muslims out of Europe.  This type of rhetoric was experienced by Jews and Irish -  in the late nineteenth century political powers in Britain tapped into the growing rhetoric against Jews and Irish leading to a restrictive Aliens Bill in 1904 (See Owen Jones’ Book Chavs). Right wing rhetoric can influence politics – this is one of the reasons why Islamophobes are so vocal. Again we are talking about a new form of racism and discrimination which has to be given a name, the word "Islamophobia" is at the head of the queue right now.


I cannot stress enough how the inertia of Muslims in Britain, Germany, France and Scandanavian countries will allow an a relatively unchecked platform for Islamophobes to influence political powers. Muslims need to get politically active – the easiest way to do this is to raise awareness of issues and talk about this type of stuff.  Chatham House’ssurvey publicised what every reasonably thoughtful person would imagine: those more educated and those who have interactions with Muslims in real life are less likely to hold Islamophobic views. As Muslims we need to start talking about these issues with Non-Muslim friends and colleagues – folks who would be more trusting of you than an anti-Muslim/Islam hate preacher on the internet. Don’t allow hate preachers to cloud your friends’ minds with anti-Muslim/Islam prejudice.
Sadly a lot of Muslims have and continue to accept this prejudice against them as something that is part and parcel of living in a Western society. This should not be the case. If Jewish, Irish, Black and LGBT  movements were able to impact discrimination and hatred towards their respective people Muslims can work towards this reality with respect to Islamophobia. Working together with Non-Muslims to raise awareness of Islamophobia unashamedly is key. All this right wing talk about Islamophobia being a buzzword of Political Correctness which delimits boundaries of criticism of Islam is red herring. Smart people should be able to see through it. Anti-Judaism polemics in the West would have contributed to Anti-Semitism: the classic example being  that of Jews having a less loving idea of God (thus in turn planting seeds in the minds of distrusting people in Christian Europe of Jews being less loving which ultimately watered the ground for Anti-Semitic blood libels to spread in Europe - even in Norwich!
How do folks ameliorate Christian attitudes towards Muslims?
An easy step is to call out the hate-preachers within the Christian community.  Sure, I am aware of intimidation tactics Pfander have used in the past but Muslims need to be willing to report abuse and Islamophobia to the authorities without trepidation. Pfander Centre have been propagating anti-Muslim rhetoric and they have been proscribed by universities and other forums according to Lizzie Schofield forIslamophobia whilst simultaneously considered to be extreme by other Christians. As you can see, there’s already a significant and politically active number of Non-Muslims who are speaking out against Islamophobia and what they deem to be toxic elements within Christian preaching communities. These are folks Muslims can join hands with.

Note: I may not have time to do a separate post on what was Jay Smith's and Dave's distasteful use of purported European anti-Muslim immigrant sentiment via the Chatham House survey, a video which manage to evoke at least one viewer to spew the old kick-Muslims-out rhetoric. Here's a blog I wrote on why that survey cannot be used by Islamophobes in the way they may think they can use it.

Cenk Uygur Proves Mulims Are not More Violent than Christians

A Few Thoughts on Jonathan McLatchie's Arguments for the Holy Spirit

Refuting Christian Fundamentalists Who Say Islam is from Devil