A message to SaRa Garvey. 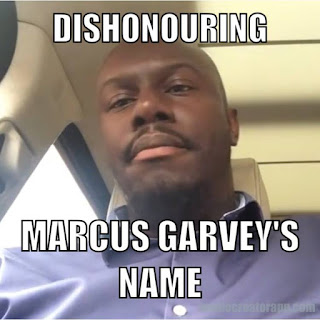 Dr Ben, Marcus Garvey and Carter G. Woodson would not be impressed by your actions. I am referring to your immature mockery and deliberate targeting of a man who has never wronged or hurt you. Your video mocking Mr Paul Williams (video entitled “The Real Gay Housewives of Speakers Corner”) simply because he happened to be the same religion of somebody who you believe made an equally immature video mocking you for playing the role of a homosexual character on screen many years ago.

For you to target Mr Williams in retaliation is simply shameless abuse of an innocent man and a dishonouring of Marcus Garvey's name which you use as your handle.

The fact remains, this gentleman believes something is a sin and he chooses to exercise the restraint of abstinence and live a life which he believes pleases God. In Islam, it is the act and not the Same Sex Attraction which is the sin. Surely, such devotion and sacrifice to God is to admired, commended and respected?

Your attack on this gentleman, who has not provoked you in the slightest, puts you in a bad light but it is clear this gentleman operates with more dignity than you in the face of online provocation too. Here is his dignified response to your immature comments:

I decided to be open about my same sex-attraction for two reasons, 1) so that non-Muslims can hear from a Muslim who is struggling with these issues and offering a counter-narrative to society’s pro-gay propaganda, 2) to explain to Muslims and non-Muslims what Islam actually teaches about homosexuality from someone who is personally effected by it. It leaves me open to ridicule – a price I am willing to pay. So far (perhaps surprisingly) nearly all the bigotry I have been subjected to comes from Christians. The guy narrating this video has clearly been stung by taunts from some Muslims about a gay character he once played in his acting work. His attack on me is his revenge.

I would put it to you, that Marcus Garvey and Carter Woodson would have had more admiration for Mr Williams than for your immature harassment of Mr Williams - the comment section of your immature video is packed with immature abuse towards Mr Williams as well which you have to take responsibility for. The irony is, this all started because somebody (or some people) hurt your feelings via online harassment. You chose to respond by harassing and hurting somebody else.

If you haven't confidence in self, you are twice defeated in the race of life. [Marcus Garvey].

The fact remains, if you had confidence in yourself and weren't concerned about responding in a macho manner for other people (those online and those in your peer group) you would have been able to ride a bit of online YouTube trolling.

Yet, from what I can see, you've possibly broken the law of the land in your abuse of a gay Muslim and your threatening comments towards a Muslim in a park whom you targeted in a show of intimidation (saying to him if you saw him on the streets "I would snatch his f***** heart out of your chest") .

You may want to read Carter G. Woodson's book for this piece of advice which you clearly have not taken on board:

Negroes* must become like English gentlemen who study the law of the land, not because they intend to practice the profession, but because every gentleman should know the law.

Sir, you are dishonouring the Conscious community.

Note, I refuse to share the videos any of the videos, the ones featuring SaRa "Garvey"'s threats and intimidating behaviour, his immature mocking of Mr Williams or those immature videos featuring his past acting scenes.

*The word Negro was not used as a pejorative, the author was pro-black

Black and Arab Inter-Marriage at Time of Prophet Muhammad (p)