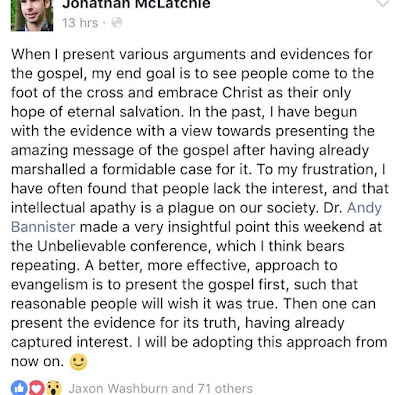 Yahya Snow: What I've noticed even on the Alpha course is that Christians are more willing to go into the smells and bells approach rather than intellectual dialogue about their faith because a proper critique of ideas such as Biblical inerrancy, Trinity and the blood atonement leads them to doubts or even complete rejection.

I recall being on an Alpha and I had, after planting a few seeds, folks reject the idea of Jesus being God and reject the Trinity in the space of an hour.

The intellectual apathy exists on the part of some to allow them to hold on to beliefs they want to hold on to. For instance a church going lady asked me if I thought Jesus was a good person. I gave her an answer she had never heard before. I said the Trinitarian version of Jesus would not be considered a good person in today's Western liberal society as he ordered the killing of mothers and babies as well as allowed the severe beating of females

She was taken aback. She did suggest the story of John 7:53-8:11 to promote the idea he was good. She was almost in tears when I told her that story is a later addition advising her to go home and check the footnotes.

The first time she has ever heard of this. She wasn't a little old lady either. She was in her 20s.

Intellectual apathy is helping Christians remain believing stuff they want to - not truth.

This approach of talking about the "Gospel" will just ultimately fizz into an emotional bout of preaching (smells and bells Christianity), the already convinced or overly emotional types will listen, but once the apologetics spiel is kicked off these folks will close their ears.

Folks like me (the majority) will be yawning and checking our messages during the smells and bells spiel and we may not even hang around till the apologetics stuff. If we do we will be frustrated at having to listen to 30 mins of appealing to emotions thus the Christian apologist may find some folks are really eager to knock the arguments for this worldview down.

I don't think Dr Bannister's approach is going to be pulling up any trees anytime soon.

But Dr Bannister seems like one of the nicer evangelicals (not so difficult given some of the evangelists out there) so maybe he can pull it off more than most. Would be interested in hearing Dr Bannister give us feedback on how effective this new method was in a year's time

Andy Bannister: Thanks, Yahya. It's actually the method that goes right back to the early church --- unless somebody realises they are a sinner and *needs* Christ, why would the cosmological argument interest them? I have seen hundreds of people come to faith in Christ this way (24 at at an event in Canada ten days ago, to give one recent example). Or you could take a look at Keller, whose church in Manhattan has grown from 90 to north of 5,000 largely using this approach. It has nothing to do with appealing to emotions, but to do with helping somebody understand what stands or falls on the gospel. It's the way the gospel has most commonly been presented


Yahya Snow: Appreciated Dr Bannister. I want to look into Tim Keller's ministry more (as a critic) but I don't think I will have time as I plan to do some work on Nicky Gumbel's ministry.
I know from stats in Britain that most converts to each church come from different denominations. I wouldn't be surprised if that is the case for your peeps and Keller's church.
The cosmological argument would be listened to by any truth seeker. The you're a sinner stuff gets folks' emotional juices running especially if this is one of the first things being driven at.

And the earlier Pauline church was about performing miracles and healings to get ppl to convert.

:) Yet to see any preacher perform a miracle although the Christian faith healers are out there like Reinhard Bonnke who claims to have has millions of converts in Africa whilst he and his protege Daniel Kollenda are giving sketchy accounts of miracles they are performing over there. interesting considering the church in Germany is dying and Bonnke is out in Africa performing "miracles" - wonder why he doesnt pitch up in a Berlin hospital to heal ppl so he can convert onlookers as in the stories in Acts.

Will try to keep an eye out for this new or not-so new approach.

Andy Bannister: I think any test for truth requires philosophical coherence + existential livability. For example, I'm currently counselling a Muslim academic in a country I won't mention for the sake of his security. It was an emotional response (ISIS) that led him to intellectual questions (especially concerning the Sira and the Qur'an) and has now led him to consider Christianity.

I think you can't have the one without the other — our emotions and our reason need to fit together; we're wholistic beings, neither brains in a jar, or a floating set of emoticons

BTW I agree with you that Alpha needs more apologetics. That's getting added in at last, especially in some of the newer digital resources they've pioneered in places like Canada

Yahya Snow: Dr Bannister, sure there are ignorant Muslims out there.

But let's not play a game of equivocation here and cloud people's minds.

The Dr Bannister of the 1800s or any Bible believing Christian of that time would have had complete confidence in the last few verses of Mark's Gospel and the PA (John 7:53-8:11) but bish-bash-boom Von Tischendorf discovered Codex Sinaiticus (or perhaps even stole it?! :)) which now means we know those two chunks of text are not part of the original text yet we had generations, nations and a planet full of Christians believing those texts were inspired and part of the Scripture prior to that discover about 200 yrs ago (not long in the grand scheme of things)

This disproves the idea the Holy Spirit guides Christians in scripture and it also effectively sets the precedent. ANY verse or chunk of text in the NT is open to a new find (manuscript discovery) which either leads it to being altered or discarded as an authorised addition (let me be crude and call it a forgery) in the future. Bye bye to a Christian's confidence in their favourite NT verse including John 3:16. Mine is Mark 3:35 ( refutes the Trinity idea and promotes an Islamic view of God and Jesus)

Think about that, ANY NT verse could be discarded as a possible forgery upon a new find!!!
And what if we do not make any new finds, we still cannot be confident ANY verse in the NT is part of the original NT as those manuscripts militating against the said verse may have been lost to humanity.

As for Uthman burning manuscripts. It's old hat. ALL the companions agreed with Uthman's principle (inc Ibn Masud). So what do we have, we have all the companions agreeing on what the Quran is and this was passed on orally through Muslim generations including all the different Qiraats. Muslims aren't relying on archaeologists to reconstruct the Quran. We know what the contents of the Quran are. The community of Muslims throughout the history of Islam have known this and do to this day. The benefit of having a collective oral tradition.

Christians don't have an oral tradition and this is why they are reliant on non Christians to help find manuscripts for them and help them with deciding what should be in their NT. Effectively Christians are groping around in Egypt looking for new manuscripts. What version of NA are we on now? 28, 29? 30?

When you don't have an oral tradition you as a community do not know what should and shouldn't be in the text - this is proven by the way Christians are looking at the NT. No certainty. No confidence. Continually in flux with every new Manuscript find with viable differing readings.

Further problems arise when we look at how Christians decided on what to include in their NT canon. Again nobody with any authority, no disciple, ever decided the NT canon. FF Bruce thinks even at the time of Sinaiticus the NT canon was not decided upon! Again, militating against the belief that the Spirit guides Christians in scripture. Revelation (the book of) was hotly debated by the church.

And the Hebrew Bible (Old Testament) has problems too. Big problems.

So not only do we have Christians uncertain on their doctrines, Gregory of Nazianzus tells us in the late 4th century that Christians didn't know for sure what to believe about the Holy Spirit as a community (a poke in the eye for the Trinity doctrine) they were also uncertain on their texts centuries after Jesus.

The same applies today. Following conjecture. Sure the conjecture is from some Christians with brilliant minds (and some not so brilliant) but it is still conjecture. Would God want us to follow conjecture about Him or would He want us to have certainty about Him?

Historical Jesus scholars openly declare Jesus was not a Trinitarian.

Think about all this deeply. Pray about it.