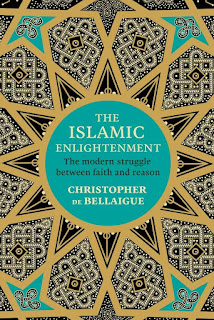 Ed Atkinson asked for some thoughts on a BBC History podcast on Islamic Enlightenment:

If a Muslim would like to listen to this and give their thoughts, I'd be delighted. It is history and the basic message is that the recent developments in Islam, some less welcome to all, are in large part the result of awful British colonial behaviour. I was convinced.

Note: I have not read Chris' book. I'm sure it would be very informative and a useful learning resoruce. Chris is a smart and informed scholar.

I found what was said in the interview a little ironic and perhaps even a little myopic in that (perhaps) Christopher de Bellaigue was looking through a particular lens. One lens. A Western lens.

Christopher de Bellaigue states there was a liberal movement in Egypt (and the Ottomon Empire) before WW1; the society was going towards more liberal interpretations of personal freedoms and autonomy. WW1 and its aftermath stopped that movement in its tracks. As Britain and France created new countries it led to more nationalist views within Muslim communities.Iran and Turkey went towards illiberal directions, according to Christopher de Bellaihue, in an effort to fend off authoritarian westernisation and subjugation.

Some thoughts that stemmed from listening to Christopher de Bellaigue:

Firstly, self-preservation is a natural reaction to perceived threats. Just look at North Korea, there’s a reason why that country is like it is – the regime feels its autonomy, self-determination and control is under threat from external players.

2ndly, I found it ironic that Christopher de Bellaigue spoke about imperialism and colonialism as grinding this progression to more liberal values to an abrupt halt as the very reason the liberalisation of Egypt began was precisely because of colonialism. This movement of liberalism began at the onset of Egypt’s rediscovery of the West, or rather the West’s discovery of Egypt. Napoleon in the late 18th century set the ball rolling. Napoleon’s conquest of Egypt led to Muhammad Ali encouraging the translation of French books into Arabic and this, alongside the colonist-colonialist psychology, would have sparked this fascination with the West. Albert Memmi has a good book on the dynamic between the colonizer and the colonized.

3rdly, what about Europe, how did Europe, Germany in mind, drift away from socialism into fascism in the early 20th century and culminate in Nazism? Economics, right? Perhaps, in his book de Bellaigue talks about this and to be fair war and carnage from WW1 would assume an economic downturn anyway but it would be nice to explore whether liberalism does not thrive in societies and communities facing economic struggle. Is liberalism the purview of those who have?

4thly, Christopher de Bellaigue talks about personal freedoms and a liberal view of such but what does he mean? What are personal freedoms, they are relative to a society. The deeper meaning of freedom would be to be free of one’s desire but the meaning in our culture of individualism is for one to be able to act on one’s desires no matter how base or petty they are.

5thly,when he talks about a closing down of cultural avenues have we ever thought these folks were just sick of being exploited and wanted self-dignity so they looked at their societies and thought these societies aren’t working and wanted to go back to a more older and nostalgic view of the past hence a move back to conservatism? And what about the idea of power working when the people are complicit, either passively or actively. Is this shift not the will of the people over there or must one think for them and think oh well they don’t really want to live like that, they want to be able to party it up every Friday night in an area like Soho or Brixton. Or to give a SC example, one of Jay Smith’s colleagues/students claiming the Muslim women wearing hijabs are oppressed yada yada...[imposing one’s condescending thoughts on them]...without ever thinking whether they are happy to wear such.

6. de Bellaigue is anti-foreign (military) intervention – great. But that does not stop Britain and other Western powers from arming certain groups and countries to effectively intervene in another state’s affairs. Perhaps it does if the West became completely isolationist. Are WE willing to see a reduced living standard and the costs of commodities increase? That’s what would happen if our country stopped exploited weaker countries. Do you want to pay over the odds for an iPhone? 2000 quid, or more? Who knows how much! We would be coughing up more if the Congo (?) had real autonomy of its resources.

7. How about our society’s lurches to a more liberal society? They have not worked. The Occupy Movement? Gone. What do we have, the rise of the Alt-Right, Donny Trump in the White House and the rise of far-right politics which has become mainstream in Europe now. Can somebody explain what’s going on here? We cannot even explain how the West has seen its liberalism stunted. Or can somebody explain it?

9. What is Freedom? Maybe we are going over ground I’ve rambled about above. Plato argued most ordinary people don’t have a strong rational nature therefore need to be constrained by those naturally more rational. Bye bye “personal freedoms”. But nobody has complete freedom. Everybody is under some legal, political, societal, emotional and physical constraint. This idea of freedom is all relative. Who gets to define what freedom is? And having less freedoms does not necessarily mean one loses their ability to exercise free will.

9. What are universal values? What is universality? A development or growth in humanity? There will be various views on what would be a growth in humanity. In the study of ethics there is no agreement on how to define “good”. I think it is colonisation of the mind and cultural imperialism for a Westerner to start talking about somebody in Egypt and imposing their view of values on them (not saying de Bellaigue was doing or implying that). We live in a society of hyper-individualism which is alien to many people in the East. Has this hyper-individualism which was propelled by the hippy movement done Western society much good? We live in broken societies. Was it Thatcher who said society in no more and we now have individuals and families?

A Few Thoughts on Jonathan McLatchie's Arguments for the Holy Spirit

Jonathan McLatchie's Comments on the Apologetics Academy: Orthodox or Heretical?