More bad news folks. There are signs Patrick Hutton may have been radicalised into Islamophobia by Jay Smith et al..

One just gets the impression Patrick Hutton has bought into simplistic evangelical rhetoric about Muslims being lost and Bible observant Christians being reformed and possessors of a new heart. Can we get somebody neutral in here? I know what, how about a couple of Jewish rabbis? These two rabbis argue Christians could be argued to be the most responsible for all the blood-shed and suffering since the coming of Jesus. What was that about Sauls becoming Pauls? Patrick may also want to ask how Christians were treating native people in Australia, North and South America and a bunch of Asians they colonised? Were they being Sauls or Pauls?

And as for our beliefs about Jesus respectively, Muslims do not believe Jesus ordered the killing of women and infants or allowed the severe beating of females slaves...Trinitarian Bible believing Christians do believe such about Jesus.

Judging by the way Patrick is being radicalised by hate preacher, Jay Smith (not sure if Beth Grove is involved) I think the non Christian and non Muslim may be asking Patrick to accept the Jesus of Islam...clearly your current religious affiliation has not saved you from effectively hate preaching against a minority group in Britain (oh and spare me the "we only hate preach against Islam but we love Muslims", I'm a little too smart to fall for that. When you go out constantly trying to link rape, murder and terrorism to somebody's religion then you are, yes you are, hate preaching against that group of people too and part of the propaganda that fuels thugs to attack mosques, old Muslim men and Muslim women wearing the hijab). 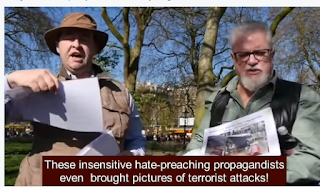 Hopefully Patrick Hutton can listen to the comments from Dr James White and Prof. Jonathan Brown in the video below and just allow common sense to win vs. hatred and bigotry. As a middle aged man, Patrick Hutton should be confident enough to not be swayed by peer pressure, especially so when that eddying is a vortex of bigotry and hatred. The word Muslim is being used as a racial trope/category nowadays and Muslims are now being seen as the other - the condemned other [listen to Prof. Gilroy's comments].


Oh by the way, Patrick during your de-radicalisation efforts, you may want to stop and ask yourself if Jay smith is lying about his conversion figures - does he really have all these British converts? After that you may want to look into his claims that he had 40/50 Muslims telling him they will kill him at Hyde Park if he burnt the Quran.

PS If you've seen anti-Muslim hate comments online - please do not sit on your hands. The more we peacefully and intellectually argue against them and even highlight them with wisdom we can raise awareness of on and offline Islamophobia.