A few thoughts on this Speakers Corner dialogue between an anti-Islam Christian from Jay Smith’s and Beth Grove’s Pfander Ministries, Elizabeth Schofield, and Hamza Myatt and Ustadh Adnan Rashid. You can find the dialogue on the SC Dawah, see here

Adnan Rashid and Hamza Myatt made pertinent points which were getting drowned out by an unreasonable Lizzie Schofield. Lizzie’s constant oh hurry up attitude and you’ve been talking too long now so let me talk approach is not conducive to respectful dialogue. It’s not sincere either, it is easy to make a claim and then hustle and harry the other person when they are trying to respond. For instance, an Atheist, could screech to Lizzie the Bible forbids divorce and gay marriage and then denounce Christianity as a false religion based on his premise and presuppositions. It would take the Atheist all of 30 seconds to launch that polemic but for the serious-minded theist (Christian in this case but in reality an argument from the same category could be launched against any Abrahamic faith) would require an involved answer: keep your ADD in check people. To deny Lizzie the time and courtesy to construct an argument which deals with presuppositions, premises and explores whether the conclusions are valid or invalid would be disingenuous – the Atheist is not really looking for a dialogue or even listen an answer. The Atheist simply wants to appeal to rhetoric, superficiality and point-score in the eyes of low level thinkers in his camp.

The irony here, Lizzie Schofield is guilty of precisely that. Turning up with a pre-prepared print-out gives the impression it’s all staged and rehearsed. Rehearsed disingenuity!

Now, this post will not be for those who are fighting sleep right now. Off you go to bed. Ahlam Saeedan. Sweet dreams! Some points, IIRC, which were made by Hamza and Adnan but drowned out by the Lizzie’s Hatun Tash-Like cadence which I want to focus on before going on to talk specifics.

1. Prophet Muhammad was in charge of a state – Jesus nor Paul were in charge of a state and as Hamza points out it’s unfair to compare a ministry of less than 5 years to a ministry which ran over two decades including state interactions with hostile players. States do impose punishment. In ethics reasons are given for state punishments. 5 common sense points are given, two of which are vindicating the law and deterring others. Lizzie goes away from descriptive ethics and veers off onto normative ethics. She’s making value judgements on certain actions she attributes to Prophet Muhammad (there is actually a fictitious story in her script which Muslims do not attribute to the Prophet as it is non canonical vis-a-vis Muslim texts and the other two I felt she didn’t fully grasp).

2. Adnan pointed out the Bible teaches obedience to governments and authorities. Actions are either moral, immoral or amoral. If Lizzie is saying a person should be free to insult religious sensitivity in any land or have unfettered free speech (which Britain does not even have – anti-semitism and anti –racism laws for instance) it actually goes against Paul’s precept concerning state laws in Romans 13

Let every person be subject to the governing authorities. For there is no authority except from God, and those that exist have been instituted by God. 2 Therefore whoever resists the authorities resists what God has appointed, and those who resist will incur judgment. 3 For rulers are not a terror to good conduct, but to bad. Would you have no fear of the one who is in authority? Then do what is good, and you will receive his approval, 4 for he is God's servant for your good. But if you do wrong, be afraid, for he does not bear the sword in vain. For he is the servant of God, an avenger who carries out God's wrath on the wrongdoer. 5 Therefore one must be in subjection, not only to avoid God's wrath but also for the sake of conscience. [ESV]

3. I think at the end Hamza did try to bring up consistency in trying to talk about Christian beliefs with regards to Trinitarian views of what Jesus did according to the Old Testament. I suppose he may have gone the other way round by talking about Christian eschatology and what they believe Jesus would do according to the book of Revelation. At that point Lizzie made a sharp retreat.

Why Don't Christians Know What the Bible Says: Blasphemy Laws and No Free Speech

The sources: Lizzie misdirected by Jay Smith or some other Islamophobe?

As Hamza was getting at, Lizzie didn’t understand the narrations what she was using.

She needs to ask questions of Beth Grove and Jay mith if they furnished her with the Asma Bint Marwan story. That’s seen as a fabrication - they were corrected on that months ago via video. Muslims do not accept it – it would be seen as the story of Jesus killing children when he was a child according to the Infancy Gospel of Thomas. Evangelical Christians would consider it unfair if somebody used those stories in their polemics against their faith. Why the double standard?

Without going back to check, I suspect she may have be have been referring to the same person in the two other narrations she cited: one of a Jewish lady being killed by an axe and another of her being killed by strangulation for reviling the Prophet (I think we are talking about the same story but just different versions).

The Prophet did not order that action, the person killed that person, upon learning of a the dead Jewish lady the Prophet:

He got angry and adjured the Muslims by Allaah that the one who had done this deed should show himself, so that he might determine his punishment and issue a ruling concerning him. But when he found out that she had broken the covenant time after time, by insulting the Messenger of Allaah (peace and blessings of Allaah be upon him) and reviling him, all her rights were denied. [Islam QA]

See here for more on that

A secularist or a Bible believing Christian?

OK, so Lizzie does not understand the sources. I don’t expect her to. The ethical judgement coming from Lizzie, a state should not enforce a blasphemy law because it is wrong (any punishment never mind death is seen as wrong by Lizzie I assume).

Lizzie argues like a secularist. She knows religion has a broader range of values which religious folk consciously subscribe to, this includes definitive rules and values. An immense moral question for one person may be of little importance to another person. For instance, gay marriage may not be a talking point for a secularist but for a Christian it may well be. Idolatry would be a faith-defining issue for all who are part of an Abrahamic faith but for somebody outside those traditions it may not be such a big deal. Blasphemy for Moses (and for Jesus from the Trinitarian point of view) was a serious crime warranting death over 3000 years ago but for somebody else at the time it really may not have been significant.

Blasphemy Law (Death Penalty) Given by Jesus to Moses According to Trinitarians.

Lizzie, needs to ask the very serious question of whether she believes Moses and (if still a Trinitarian, Jesus) are immoral for Leviticus 24

10 And the son of an Israelitish woman, whose father was an Egyptian, went out among the children of Israel: and this son of the Israelitish woman and a man of Israel strove together in the camp;11 And the Israelitish woman's son blasphemed the name of the Lord, and cursed. And they brought him unto Moses: (and his mother's name was Shelomith, the daughter of Dibri, of the tribe of Dan:)12 And they put him in ward, that the mind of the Lord might be shewed them13 And the Lord spake unto Moses, saying14 Bring forth him that hath cursed without the camp; and let all that heard him lay their hands upon his head, and let all the congregation stone him.15 And thou shalt speak unto the children of Israel, saying, Whosoever curseth his God shall bear his sin.16 And he that blasphemeth the name of the Lord, he shall surely be put to death, and all the congregation shall certainly stone him: as well the stranger, as he that is born in the land, when he blasphemeth the name of the Lord, shall be put to death.
Free Speech: Did Jesus believe in it according to Trinitarians? Death Penalty for words?

Can Lizzie, in a state of consistency, argue the way she does against Muslims and not reject Christian simultaneously? Surely, Lizzie was arguing against Exodus 21:27 and 2 Kings as free speech does seem to have been punished in certain circumstances by Jesus according to Trinitarians.

Anyone who curses their father or mother is to be put to death. [Exodus 21:17]

According to Steven Anderson, Jesus is backing up the commandment in Exodus 21 in Matthew 15:

Matthew 15:4 For God said: 'Honor your father and mother' and 'Anyone who curses his father or mother must be put to death.'

Pastor Steven Anderson teaches this refers to people who curse their parents (not insult or are disobedient, i.e. those children who wish their parents will die or go to hell) and those who hit their parents

23From there Elisha went up to Bethel. As he was walking along the road, some boys came out of the town and jeered at him. “Get out of here, baldy!” they said. “Get out of here, baldy!” 24He turned around, looked at them and called down a curse on them in the name of the Lord. Then two bears came out of the woods and mauled forty-two of the boys
Conclusion

I would urge Lizzie to consistency and a higher level of sincerity. Folks do see your arguments to be disingenuous and this reflects bad on you - regardless if Smith or Grove handed them to you. 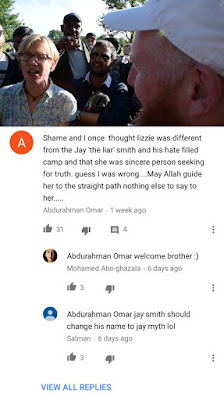