The worst Christian explanation of 'Now kill all the boys. And kill every woman who has slept with a man, but save for yourselves every girl who has never slept with a man.'?

Do these Christian apologists actually think about what they are saying or do they automatically assume their Christian audience is half-asleep and/or stultified of mind?

Here's the passage the Christian apologist attempts to explain:


If video does not play, please see: http://www.youtube.com/watch?v=uRoXngFaiDY

What's that I hear?

Do I hear a stampede of disgruntled Christian donors to this Christian apologist's house asking for their cash back? Do I hear Bassim Gorial calling the bank to cancel any cheques he handed this man for such an insufficient and confusing explanation?

I remember reading in a book that said all the intelligentsia left Christianity for communism a few decades ago. I genuinely believe Christians have lost many of their intellectuals to secular humanism in current times and thus are reliant on a string of apologists who are not the best intellectually (in the case of this Christian apologist, Sam Shamoun, almost bankrupt in this regard).

I can say I've had some dealings with this particular apologist, Mr Shamoun, he strikes me as somebody who is quite dim and even lacking mental balance:
http://thefactsaboutislam.blogspot.co.uk/search/label/Sam%20Shamoun

The question I have for the Christians out there, why are you relying on folklike the apologist in the video? Surely it only presents you and your community in a negative (and even intellectually dishonest) light...
﻿﻿﻿﻿﻿﻿ 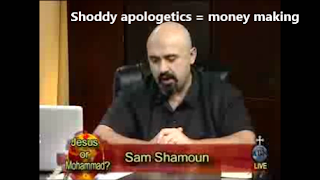 ﻿﻿﻿﻿
I publish this video to counter this man's money making operations on the net and warn people from his shoddy and intellectually dishonest apologetics. Do you really think he should get paid for such arguments?

This is one of the problems with amateur Christian apologists who are collecting cash on the net. Rather than just saying they don't know, they turn up with a dud light-bulb stuck to their head presenting theories that just don't make sense and/or make them look intellectually dishonest.

As for the Numbers 31:17-18 that Christians (and Jews) struggle with, why not just accept a Muslim understanding of them - that's to say you don't know whether those teachings are actually from God or just forgeries added to the OT?! Simple. Problem solved!

For a believer, if they believe God did something they don't need to make up excuses.

Invitation to something better

Rather than missing the point please focus. In this post I'm not making a case for Numbers 31:17-18.

I'm simply highlighting the 'explanation' given by the Christian apologist lacks common sense.

Seen as /I have seen that particular apologist in action before I am more rugged with him as the gentle approach did not knock him into the line of honesty and sense. Let's see if the more coarse approach yields some results.

Sadly folk such as Samuel Green and James White are a little reluctant to tap this man on the shoulder and give him advice to stop showing himself up.

Performing monkeys will perform for their peanuts until their handler takes them out of the show.

Sam just retire. He is like old man who dnt know Wat he is saying

When will u ever learn. No one is intimidated by your non-arguments. What u are calling the "coarse" approach is just u name calling and showing u have no argument. And because u prove that Sam has u so bad off i am going to contribute to his ministry.

Sam is not scholar. He gets pwnd.