Number of Muslim Terrorist Groups Increases by 58% Since 2010 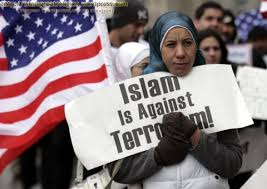 It's surprising but also not surprising at the same time - paradoxically. Of course the number of groups wanting to harm the US through terrorism is going to increase as the US has been consistently butchering Muslims, torturing Muslims and invading Muslim lands. You'd think there will be a few pissed off Muslims out there who have lost family and friends due to America's abandonment of humanity and more than a few who are disgusted at the srimes of America against Muslim people. There are plenty out there as America has been busy bloodying her hands for a loooong while.

However, the good thing here is that Islam does not allow terrorism, thus the knowledgeable, pious and religious Muslims will not conduct any terrorist attack on the US. However, not all Muslims are educated and pious hence the increasing number of Muslim groups willing to do some harm to the US through terrorism.

Americans, rather than solely relying on Islam to keep pissed off victims of US imperialism would be well advised to start speaking out against the atrocities and injustice that US foreign policy is embroiled in when it comes to Muslim lands. Not all these pissed off people are going to abide by Islam and desist from terrorism. The bad Muslims may well ignore (or be unaware of Islam's teachings) and thus attempt terrorist attacks.

If any Muslim with terrorist thoughts is reading this, please DO NOT become a terrorist. Terrorism is a crime in Sharia. Here's what Sharia teaches about terrorism:

Rand Corporation—There is a growing terrorist threat to the United States from a rising number of Salafi-jihadist groups overseas, according to a RAND Corporation study.

Since 2010, there has been a 58 percent increase in the number of jihadist groups, a doubling of jihadist fighters and a tripling of attacks by al Qaeda affiliates. The most significant threat to the United States, the report concludes, comes from terrorist groups operating in Yemen, Syria, Afghanistan and Pakistan.

“Based on these threats, the United States cannot afford to withdraw or remain disengaged from key parts of North Africa, the Middle East and South Asia,” said Seth Jones, author of the study and associate director of the International Security and Defense Policy Center at RAND, a nonprofit research organization. “After more than a decade of war in Afghanistan and Iraq, it may be tempting for the U.S. to turn its attention elsewhere and scale back on counterterrorism efforts. But this research indicates that the struggle is far from over.”

AlShabaab and Alqaeda, why they commit terrorism - Asghar Bukhari:
http://thefactsaboutislam.blogspot.co.uk/2014/04/why-al-shabaab-and-al-qaeda-kill-asghar.html