Islamophobic bigots always highlight honor killings when a Muslim is involved yet seem to be pretty silent when a non-Muslim is involved. They do the same for rape, when a Pakistani rapes, the Islamophobes are shouting from the roof tops. How many Islamophobes have been discussing the problem of rape in India or the US army? Not many - if any!


An Imam on honor killings!

All this disparity in reporting is designed to single out the Muslim and unfairly paint the Muslim in a poor light. It's all hatred. The meat and drink of the Islamophobe is to portray Islam as allowing honor killings - the thing is it does NOT allow honor killings! 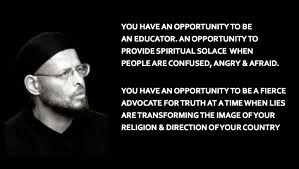 The following is a response, based on an earlier article, to the murder of Farzana Parveen on the steps of a courthouse in Lahore Pakistan, allegedly by members of her family. "For that reason, we ordained for the Children of Israel that whoever kills a soul for other than murder or spreading corruption in the land, it is as if he has killed the whole of humanity…" Qur’an 5:32

One of the gravest charges levied against Islam, in terms of its supposed misogyny, is the claim that it encourages a phenomenon known as honor killings. This un-Islamic practice consists of the murder of female family members who are seen as dishonoring their families through real or perceived acts of indiscretion, such as premarital sexual relations or unapproved dating. This charge has been intensified recently due to the tragic murder of a twenty-five year old woman on the steps of a courthouse in Lahore. What had she done to dishonor her family? She had married a man other than the cousin chosen for her by her family. Her marriage was legal under Pakistani law.

The practice of honor killings has absolutely no sanction in the Qur’an, the Prophetic practice, or in the evolved systems of Islamic law. In the case of fornication or adultery, the only way a charge can be levied against an individual, male or female, is through confession, which is discouraged, or by four people actually witnessing the male organ penetrating the female. Even if four people witnessed a naked man engaged with a naked woman, but could not actually testify that they witnessed penetration, their testimony would be rejected and there would be no punishment of either of the suspicious parties.

In a somewhat related issue, it should be noted that in three of the four Sunni schools of law, and all of the major Shiite schools, pregnancy is not a proof of fornication, as the possibility of rape exists in such a case. Therefore, if a single woman were to become pregnant, according to the overwhelming majority of Islamic jurists, there is no basis for punishing her.

In the case of dating, there is no Islamically-mandated punishment for a male or a female seeing a member of the opposite sex against the wishes of their families. Such situations should be handled with counseling, compassion and a healthy dose of common sense.

In a someone related issue, Muslim immigrants who have come to the West should realize that they have placed their children in an environment where there is a tremendous amount of un-Islamic peer pressure. This is especially true if they have placed their children in public schools, as was the case of the young lady who was murdered by members of her family several years ago in a well-publicized case in Canada. Children who succumb to that pressure should not be seen as “bad” kids, for by the standards of the society that has shaped them, no matter how strong their home environment is, they are normal. To kill a female guilty of an offense such as dating or dressing like her peers under such circumstances is nothing short of cold-blooded murder, and no Islamic authority can argue otherwise.

The overwhelming majority of Muslim societies are free from the practice of honor killing, although it does endure in some parts of the Middle East and South Asia. According to statistics released by the United Nations in 2000 there are approximately 5,000 deaths annually from “honor” killings. Even if one killing occurred due to such barbarity, it would be one too many, as the above-mentioned Qur’anic verse emphasizes.

To use the existence of such killings to smear Islam shows the desperation and misplaced priorities of many of those levying such attacks. Most of those deaths are the pathetic acts of sick individuals, who are far removed from the letter, as we have shown above, as well as the spirit of Islam. An example of such an individual is Muhammad Riaz, a British Muslim of South Asian descent who died in 2007 as a result of a fire he set to burn to death his wife and four daughters, allegedly because his wife resisted his attempt to arrange marriages for their daughters. His wife and daughters also perished in that fire. To present Riaz, whose daughters had neither fornicated nor dated, as anything other than a sick individual is truly sad.

Attacking Islam from this angle is a case of misplaced priorities because it can distract attention from far more widespread abuses of women, which like honor killings, demand immediate redress. For example, the State Department estimates that approximately 800,000 women and girls are trafficked as sexual slaves annually. The overwhelming majority of these females are taken from and sent to nominally Christian countries. It would be totally disingenuous to present this sordid practice as an indictment of Christianity.

Over the last decade, well over five thousand women have been kidnapped and then gruesomely murdered in Guatemala. Their bodies usually turn up after a few days, mutilated and in some instances with messages such as “death to bitches” written on them. To date, only a handful of men have been incarcerated in connection with those attacks. In fact, Central America, topped by El Salvador, has the highest rates of female murders in the world. This region is exclusively Christian. It would be easy and simplistic to attribute such femicide to Christianity while ignoring the complicated plethora of social, cultural and economic factors behind it. The same is true in the case of Islam and honor killings.

Another situation demanding immediate redress is the plight of women in many areas witnessing armed conflict. In many of these areas, where all semblance of governmental authority has broken down, rape is endemic. One such area is the eastern Congo. Tens of thousands of women have been raped, many in the most brutal fashion. Visitors to the area state that no female, regardless of age, is safe. There are reports of women being strung up on poles for days on end and then repeated raped by any soldier passing by. Again, the Congo, and Rwanda, where many of the transgressing soldiers come from, are predominately Christian countries. Should this violence be seen as a Christian or as a human problem? The answer is quite clear. It is a human problem. So too honor killings.

In this context, we can point out the massive problem of rape in non-Muslim countries such as India, currently reeling from the scandalous rape and murder of two teenage girls. In fact, a woman or girl is raped every 22 minutes somewhere in India. We can also mention the systemic rape and other forms of misogyny plaguing institutions such as the US military. In trying to address these problems, wider socio-cultural issues are the first consideration, not religion.

Honor killings are an extreme form of domestic violence and should be seen as such. Here in the United States, such killings in the Muslim community are extremely rare –if widely publicized when they do occur. On the other hand, in the wider community, there are approximately 1,200 women killed every year by their husbands or intimate partners. There are other non-Muslim nations where the number of murders of this type is even higher. When we point to manifestations of such violence in Muslim communities as being an exclusively "Muslim" issues, we miss the opportunity to discover the real roots of the problem, leaving it largely unaddressed -both in Muslim and other contexts.

Femicide is murder regardless of the cultural context it occurs in. It is an issue that is an affront to human dignity and requires our collective attention. We must move beyond ideologically-driven efforts to attribute any barbaric practice undertaken by a misguided Muslim as informed by “Shariah” and somehow unassociated with similar or more egregious actions undertaken by member of other communities. Until we view such problems in this comparative manner, we are in jeopardizing the health and integrity of our society.

Saying this is not to minimize the gravity of so-called honor killings to the extent that they do occur in Muslim societies. As Muslims, we are commanded to be committed to justice. That commitment entails that as a community we oppose in the strongest terms “honor” killings and take immediate action to end such a practice in our communities.

Practical steps include the following:

1. Emphasize that such killings have no sanction in the Qur’an, the Prophetic practice, or in Islamic law.
2. Declare anyone guilty of involvement in honor killings to be a cold-blooded murderer.
3. Encourage judicial authorities to enact the harshest penalties possible for anyone accused of involvement in such killings.
4. Educate our Muslim communities about the un-Islamic nature of honor killings, and the pressures, nuances, challenges and complications facing young Muslims, male and female, wherever they may be.
5. Work to eliminate the double standards, and to expose the hypocrisy that exist in our communities, generally, concerning attitudes and standards relating to the indiscretions of males as opposed to females.

In conclusion, Islam honors the female, and values femininity. It is up to every Muslim to translate teachings in that regard into a beautiful reality that helps to elevate the status of women in all societies. Honor killings, domestic violence in general, murders of the type terrorizing women in Central America, rape, female sexual slavery and trafficking, as well as pornography, are all crimes against humanity that we should oppose in the strongest terms and work strenuously to eliminate. If our women are not safe, psychically, emotionally, spiritually, or psychologically we are all at risk, for without women men are incomplete, and without men women are incomplete. Our Prophet, peace and blessings of God upon him alluded to this when he said, peace upon him, “Women are the complimenting halves of men.” We must all work much harder to make our community whole.


Jesus taught people to do the Will of God (according to Mark 3:35) in order to become his brothers, mothers or sisters. A Muslim means one who submits to the Will of God. Do you want to become a brother/sister of Jesus? If yes, become a Muslim. Now is the time.