When your friends are saying you are wrong and your other friends aren't willing to say you are right you know there are issues. David Wood's misuse of rape and murder victims to make cash, get a few views, hate-monger against Muslims, do a bit of Christian evangelism and self-promote himself is not doing him any favours at all. Dave the cash-making business of Islamophobia is dying. 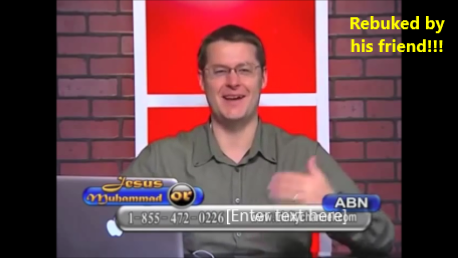 Farhan has told me he intends to visit David Wood soon. I hope he can help turn David Wood away from hatred and help him get a proper job (if he doesn't have one - hating people on the net is not a proper job regardless of how much cash one makes from it). All this internet bigotry is not doing his mental state any good at all. Dave, you've made a few bucks out of Islamophobia, the business is dying now. Maybe the new business will be Russia-phobia  seen as the US is at loggerheads with Russian nowadays. Can you imagine Dave fishing the net for negative news stories of Russians raping and murdering in order to hate-monger against them. Dave describes himself as a patriot (what the!!!) so I just wouldn't be surprised. Nationalism is a disease...

PS One more question for his friend, Farhan, do you rebuke him for using the misery of rape victims to bash Muslims? There are rape victims in every community, it takes a certain type of sickness to trample on their misery to hate-monger against a religious community...

A message to one of his financial backers which is relevant to all those who give Dave cash:

I assume after my email you will be reading this post and possibly deciding to comment. Before doing so have a look at Dave using the misery of rape victims:
http://thefactsaboutislam.blogspot.co.uk/2014/05/nabeel-qureshi-james-white-and-ravi.html
http://thefactsaboutislam.blogspot.co.uk/2014/05/samuel-green-and-james-white-should.html

And Nabeel aint coming to their rescue is he:
http://thefactsaboutislam.blogspot.co.uk/2014/05/nabeels-buddy-hate-preaching-again.html

Oh one wonders where he got this vile tactic of self-promotion and rabble-rousing from? Geller and the like use this vile tactic:
http://thefactsaboutislam.blogspot.co.uk/2014/04/pamela-geller-abusing-sexual-abuse.html

PS The Arab-looking guy who hangs with him (is that tokenism?), Shamoun, was sending me messages of abuse recently over this post, guess he liked the possibility that folk will leave with the impression that he has White’s full approval for his dishonesty and malice:
http://thefactsaboutislam.blogspot.co.uk/2014/04/james-white-exposes-dishonesty-of.html

All I’m asking you to do RM is to think like Negeen Mayel. Why is it that she left Dave? YOU are giving him cash to a serous tune (assuming your private communication in this regard is true). Why? Why not give that cash to a charity for starving kids rather than a guy who is living off somebody else’s dime for simple sitting at home and hate-mongering against a group that he the right wing deems to be fair game.

Ask yourself why PASTOR Samuel Green never came to defend their abuse? Why Nabeel Qureshi has never supported them despite having an opportunity in a radio debate recently with a Nazam44? Why Negeen Mayel blasted him? Why MJ Sharpe is not working with him? Why White has never given a full endorsement?

It seems weird doesn’t it?

Can you seriously tell me their actions are Christian and worthy of $100s?

The David Wood section, scroll down to view the older posts:
http://thefactsaboutislam.blogspot.co.uk/search/label/David%20Wood

Any ex-Muslims out there?

If you are an ex Muslim please come back to Islam. Islam is a way of life that enables one to have a relationship with God. Islam is a beautiful religion which if full of proofs and spirituality. Please watch this video, the door is still open...