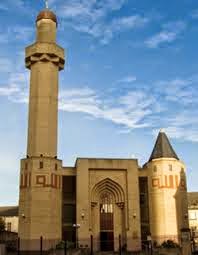 
Chelsea Lambie and Douglas Cruikshank have been jailed for an attack on Edinburgh's Central Mosque. They attacked the mosque with bacon. Weird story.


If Chelsea and/or Douglas are reading this I would like to invite you to Islam. Become Muslims. Islam offers a deep spiritual and meaningful relationship with your Creator.

I think upon their release Muslims should invite them to Islam and Edinburgh's Central Mosque should offer them a tour of the mosque. There's a lot of ignorance out there about Islam and Muslims which leads to offences such as these.
A teenage girl and 39-year old man who desecrated an Edinburgh mosque by attacking it with strips of bacon have both been jailed.

Chelsea Lambie, 18, from Paisley, was sentenced to 12 months and Douglas Cruikshank, from Galashiels, to nine months.

They attached bacon to door handles and threw strips inside Edinburgh's Central Mosque on 31 January 2013.

Sheriff Alistair Noble, at Edinburgh Sheriff Court, said: "It does not seem to me there is any way to deal with this case other than by custody."