The Far Right and Capitalism

Generations of the Muslim community remember vividly the struggles against the far right; the encountering of gangs of bald headed neo-Nazi going ‘Paki-Bashing’ was far too common. As the fear of the rise of the Far Right coming to power is a real and genuine concern for many, whether this be at a local, national or European level. 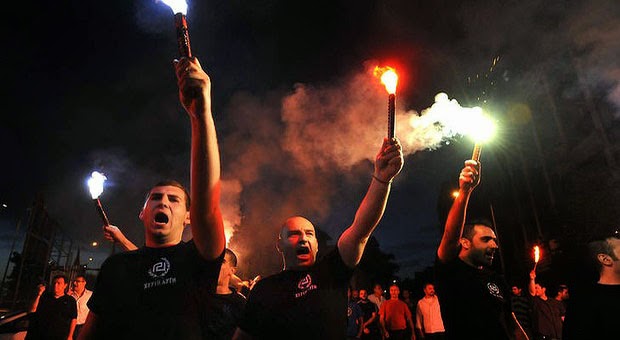 The spectre of the right wing has once again come to the fore making significant gains in recent local and European Parliamentary elections. No nation seems to be immune to this rise. Brandishing a fiery anti-Islamic agenda as their standard the far right groups are now again the focal point of discussions within the Muslim community. Apprehension and anxiety is natural, especially on the back of previous experiences and the rhetoric issued.

What are the real reasons for this rise in the far-right? And what role does the Muslim community have in addressing this issue? In order to clarify these questions and others, it is necessary to look beyond the rhetoric and take a peek behind the facade of the crumbling societal fabric that makes up Western Europe.

The on-going worldwide recession, the severest since the 1930’s, has proved to a fertile planting ground for the hyperbolic rhetoric of the far right groups within Europe. Mass scale unemployment, plummeting living standards and ever increasing prices have garnered support and popularity for the anti-immigrant and anti-European vitriol espoused; as the current system crashes about them, the general population, in search of answers, seeks solace in blaming ‘the other’.

Alex Tsipras of the anti-austerity party Syriza, in Greece, commentated “”Europeans are celebrating the defeat of the bailout and austerity in the country the European leadership turned into the guinea pig of the crisis,”

Others have also referred to the economic climate as mainstay of the rise of the far right, “The rise of far-right populism is a sign that the economic policy of austerity in Europe really has failed.”
The immigration issue has been used, by all mainstream parties, to divert and deflect the mind of the populace from questioning the flawed system of Capitalism. Rather countless column inches and airtime is reserved for the sole purpose of addressing a truly non-existent issue. Despite making immigration the major concern in the minds of the ordinary citizen, particularly in Britain, figures released by Office of National Statistics show UK net immigration to have been 212,000 for 2013.

The figure, which makes up less than 0.3 percent of the entire UK population, when analysed further almost half of this number are actually fee paying International students; the remaining, if the mainstream are to be believed, are the yoke upon the economy and the reason for its current state.
Strangely enough, however, the real reason for the application of austerity measures, namely capitalist policies and bank bailouts scarcely gets a mention. The National Audit Office revealed the full extent of the UK government bailout operation with respect the financial sector, a princely sum of £850 billion. Figures which no doubt dwarf any apparent burden 0.15% of the population could place on the economy.

Yet the real reason for the austerity measures, capitalist policies and the bailing out of the banks scarcely gets a mention. The National Audit Office revealed the full extent of the UK government’s bailout operation with regards to the UK banking sector and money markets. A total of £850 billion has been used to bail out the sector. Yet the focus is on benefits and immigration.

Whilst far right extremist groups have been largely responsible for the rise in physical and verbal abuse towards Muslims, it is the UK government and its institutions that have nurtured the hostile climate towards Islam and Muslims, resulting in the normalisation of the far right and their views. A recent example of this is the comment of the First Minister in Northern Ireland, Peter Robinson and the subsequent backlash on the local Muslim community, including the attack on two Pakistani men in their own home.

Far right organisations and their counterparts in Europe are simply an extension of the Western government’s agenda against Islam at a domestic level as well as international level. They simply take the Government’s message physically onto the street, through their demonstrations and placards which demonise Islam and the Shari’ah. So we shouldn’t lose sight of the actual instigators behind this rising hostility towards Muslim and Islam in general. It is the secular capitalist state, which creates a climate that justifies the demonising of Muslims and attacks on Islam, in order to justify their barbaric foreign policy and imperialistic wars in the Muslim lands.

Fringe parties such as the BNP have contributed minimally to rising tensions when compared with provocative comments from the likes of Jack Straw, Blair, Cameron, Michael Gove, Theresa May and others. Prior to the elections a UKIP candidate declared that “anyone who does not fear Islam is a fool”, yet it was David Cameron who told European leaders to “wake up” to the threat of Islamist Extremism and the radicalisation of Muslims. France’s Nicolas Sarkozy announced that halal was the “issue which most preoccupies the French.” Although the far-right groups have picked up on the changing atmosphere and thought it to be ripe for recruitment, the driving force behind the continued attacks on Islam have been the mainstream parties and media. The united stance by all parties against Islam is not coincidental, rather it forms part of a wider ideological attack which transcends party allegiances due to the shared beliefs in the core ideas of secular liberal capitalism. These very values form the basis of an aggressive foreign policy that’s then prosecuted in the Muslim world.

These examples should clearly demonstrate that the rise in far right groups are ultimately a failure of capitalism which demonises the “other” to deflect criticism from its own foreign policy as well as criticism from the failure of its economic system.

Muslims may feel that with the rise of the far right they must go out and support the very same mainstream parties that have given rise to the problem of the far right in the first place. Other Muslims may believe we must keep our heads down, fearing that overt expression of Islam will only antagonise the hatred against Muslims. However there is a very real opportunity to present Islam in a comprehensive manner to the wider society that has witnessed a crisis and failure of capitalism. A system where the banking institutions received £800bn bailout money yet 1 million people in the UK alone languish in poverty, reliant on food banks.

The Islamic economic system does away with usury which is the foundation of the banking system, it also places the fundametnal importance on distribution of wealth rather than production.Under capitalism the assumption is that if the producers of wealth are given more wealth this will trickle down to the rest of the society through the market’s magic hand. Hence European governments are willing to implement austerity measures on the poor but will provide hundreds of billions of pounds to the rich capitalists with a failed assumption this will trickle down to the rest of society. Whereas Islam recognises that those with capital will tend towards monopolisations and thus Islam has a number of key policies that would prohibit this monopolisation as well as provide a fertile economic environment for the distribution of wealth. If individuals are unable to fulfil their needs then the State under Islam is obliged to fulfil the basic needs of food, clothing, shelter, health, security and education. Thus Islam reorientates the economic priorities of a State and counters capitalism’s tendency to create monopolies not only in wealth but also in political power.

Therefore by presenting many of the Islamic solutions to the problems we see in the West, whether for the individual in terms of the spiritual vacuum left by a materialistic drive society or the providing solutions to socio-economic problems that have been created by capitalism we will be able to simultaneously provide a different vision to that espoused by the reactionary far right and help to dispel the myths and propaganda against Islam and the Muslims.

For more details explaining Islam’s solution to the crisis of capitalism please see :
Reforming the Beast
Taming the Beast

Christians having dreams and converting to Islam:
http://thefactsaboutislam.blogspot.co.uk/2014/03/christians-are-having-dreams-and.html
Posted by Yahya Snow at 07:44