What is interesting to note here is how strikingly similar the outfits are for each faith, yet the attire worn by women from the Islamic faith is married to words such as ‘oppressed’, ‘medieval’, ‘backwards’.

There is a lot of National and International media coverage and literature regarding why Muslim ...women cover; with some of these studies/opinions interpreting the attire as a mark of male domination, backward culture practises, restriction of a woman’s freedom and more recently; a security threat.


Yet, people from other faiths share incredibly similar attires but never face anywhere near the same discrimination as Muslims – one society, 2 different rules! [MPACUK] 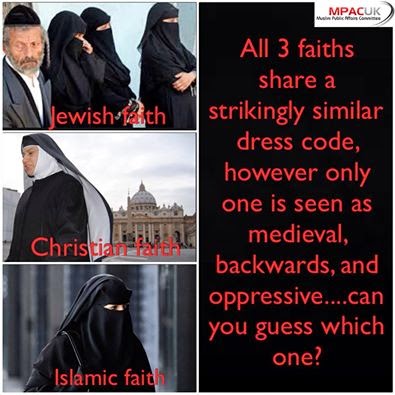 Here's MPACUK's comment on a woman in France who was fired from her job for simply wearing the Hijab!

France’s top court has sustained the decision of a privately run childcare centre to fire an employee (Fatima Afif) for wearing the Hijab to work.

The Hijab simply covers the head not intelligence or drive. The Hijab does not restrict a woman from interacting with other members of society, or from being a proactive member in the community. The Hijab does not imply that women are mediocre to men, nor is it a symbol or indication of an oppressed woman that needs freeing or res...cuing. It is a choice and should be respected as such.

Here's the comment of a female Christian minister who wears Hijab at times:

I am a Christian minister in America.  Although I don’t always wear hijab, often times I do in prayer/dua, in daily routine, and even in church!!! God sent me many beautiful Muslim friends. Really, I cannot imagine my life without them. They have been there for me in good times and bad. Some Christians have taken issue with me about this matter but they are not God. My God says it is good. So I tell them that if they don’t like it too bad. Hehe

There is so much hypocrisy in all the Christian movies of the Old-testament and the Gospel. The women wear them. Mary, mother of Jesus is always presented wearing a hijab in our Christian paintings. The Catholic nuns wear them. African women wear head dresses. In many Christian churches, women wear  head coverings  before entering to worship. It is their belief according to the way they interpret the scriptures in the Gospel!!!

Christian women in many parts of the world wear them and yet they have the audacity to criticize a Muslimah (Muslim woman) for her hijab!!! Too many Christians are singling out the Muslims and just picking on them. Well, me and many of my Christian friends know the meaning of fairness & respect. I will preach it ’till the day I die!!! I dedicate this to all my Muslim friends…Alhamdulillah!!!

Christians having dreams and converting to Islam:http://thefactsaboutislam.blogspot.co.uk/2014/03/christians-are-having-dreams-and.html
Posted by Yahya Snow at 03:57