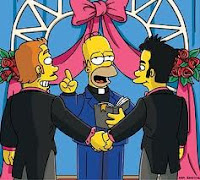 The rise of gay churches and clergy men (and women) is startling to those who have an orthodox grounding in the Bible. Sadly, Christian ethics are blighted by the secular manifestations which “have become increasingly in terms of purely individual self-fulfilment and self-expression.” [1]

Basil Mitchell expresses the potential dangers in the reliance on “the personal” and does advance the notion; this criterion (“the personal”) could be used to justify same-sex unions and relations outside marriage. [1]

Let’s be frank, this is exactly what we are seeing in the West – more and more Christian leaders are essentially following the secular band-wagon and presenting Christianity as secularism with an added belief in Jesus.

Gay Christians, prepare for the shock!

We would like to ask the churches who are so accepting of gay and lesbian clergy and congregations to have a closer look at the Old Testament and the writings of Paul of Tarsus (aka Apostle Paul). It will surprise you and Bernadette J Brooten’s interpretation will send shock waves down your very being.

I find it peculiar that it’s a Muslim who has to point this out – the Bible is vehemently opposed to same sex relationships.

“Leviticus 10.13 prohibits sexual relations between men, defines them as an “abomination” and places them under the DEATH PENALTY (see also Lev.18.22)” [2]

Liberal Christians, I will tell you that it gets more shocking as, according to Brooten, this death penalty includes rape victims – including children.

Brooten writes, “Ethical considerations such as consent, coercion or the power imbalance inherent in adult-child relations are not legally relevant in these passages (nor in the surrounding Levitical Laws on adultery, incest and bestiality). Thus, regardless of the sexual relationships of the participants (a man and his consenting male partner, an adult male whom he had raped, or a child victim), all are equally culpable, since all are equally defiled (see Philo, De spec.leg.3.7.37-42).” [2]

According to Brooten, Paul (in the New Testament) “does not employ the ethical categories of consent or age for distinguishing between sanctioned and condemned sexual relations” [2]

Nevertheless, our liberal Christian friends will point out these laws are from the Old Testament and that they follow the New Testament. They may well call the OT laws a “curse” – Jesus’ following of this “curse” coupled with those Christians who maintain Jews must still abide by OT laws militates against this outright dismissal of the OT.

However, Paul (in the NT) AGREES with the OT laws concerning homosexuals.

This information may be faith-shattering to gay Christians but it must be said regardless of the ramifications. Paul offers no acceptance for lesbian Christians either…

Paul is against lesbianism too!

“Paul extends the prohibition to include sexual relations between women (Rom. 1.26) as do other postbiblical writings.” [2]

Christian Islamophobes are constantly prattling on against Sharia but are absolutely oblivious to the hypocritical depths they sink to whilst doing so. A law based on the dictates of God is never going to be morally unacceptable as true morals are taught via divine revelation. The real problem crops up when folk who are motivated by their desires decide to change a religion for purposes of “self-fulfilment” – this is what we are seeing within Christian circles as we speak.

Earlier today, I had a conversation with a Catholic and told him of the Muslim view of the Bible having been altered by men – I told him this belief is easily proven too – he agreed!

It is the job of the truth seeker to seek out the true religion. Christianity makes more sense when one utilizes the lens of Islam to view it.