Now, this man who goes by the name 'Radical Moderate' gives cash to the Christian hate preacher, David Wood, who nudged Nabeel Qureshi towards Christianity. Here's his anti-Muslim comment that he sent to me via email in which he rejoices in the death of Muslims and hopes for more: 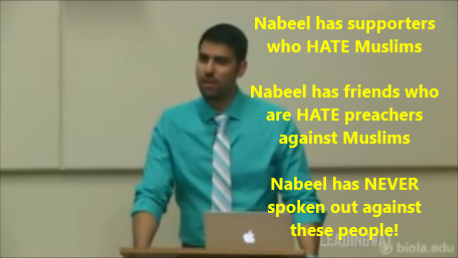 I understand Dr Nabeel Qureshi didn't make this comment and nor does he have any control over those who have followed/supported him in the past but it's really worrying that Nabeel has never gone on public record to disassociate himself with his former associates who are effectively radicalised hate-preachers against Muslims.

The comment above is coming from somebody who has informed me that he has committed serious amounts of money to Nabeel Qureshi's hate preacher friend, David Wood. As David and Nabeel worked together in the past, it's not unreasonable to imagine some of that money went to Nabeel Qureshi. How does Nabeel feel about the possibility of having received cash from such hate-filled supporters? How does Nabeel feel about having teamed up with radicalised Christian hate preachers in the form of David Wood and Sam Shamoun. How does Nabeel Qureshi feel knowing that his former colleague Negeen Mayel denounced his best friend as self radicalised?

This is something Nabeel Qureshi needs to look into. Is it odd that he has never made a statement on his hate-preacher associates? Never denounced the hate-filled lies and mockery that his associates have spewed in the direction of Muslims?

But none of that has anything to do with Nabeel Qureshi who's father I should point out is a retired US Naval Officer.

Notice you have nothing to say about the devastating class he gave at Biola University on the corruption of the Quran.

I invited you to apologise and this is your reaction?

This is really disappointing. You falsely accuse me of being a 'terrorist supporter' despite my constant denouncement of terrorism and promotion of the teaching that Shariah forbids terrorism:

Be truthful. I'm saddened that your hatred takes you to such depths.

And then you go on to support your desire to see Muslims killed. Really sad.

You claim to be a follower of Jesus, would Jesus say and hope for the same thing - the death of Muslims? No.

May Allah guide you. Ameen.

A British man jailed for "posing as a Muslim", has spoken for the first time since returning to the UK.

Masud Ahmad, 73, was arrested in Pakistan in November under blasphemy laws but fled while on bail.

The 73-year-old is part of the minority Ahmadiyya sect, who are considered heretics in Pakistan.

They were declared non-Muslim in 1974 by the Pakistan government because of their belief in a subservient prophet after Muhammad.

One of the restrictions on their religious freedom is that they cannot publicly recite the Koran.