Canadians forced to respect modest Muslim Women from within?

This is further encouragement for women in Canada (and the rest of the West) to wear the Hijab. A Canadian student conducted a social experiment to see if she would be treated differently whilst wearing the hijab - her anecdotal findings suggest she was treated with more courtesy and respect.

Is there something deep within these Canadian people telling them that a lady with a hijab should be honoured? That the dress code of hijab is better than your average Western garb? That the hijab is something one can associate with piety?

Christians in the West have seen their modesty levels decline in recent years, maybe Muslim women will be the ones to help Christians see the importance of modesty.


Daily Mail—A Canadian college student recently conducted a social experiment to see if people treated her differently if she wore a hijab - a traditional Muslim veil that covers a woman's head and chest - and what she discovered was a bit unexpected.

Anisa Rawhani, a third-year student at Queens University in Ontario, wore the traditional Muslim garb for 18 days in January as she worked at the university's library, visited stores and restaurants near the campus and as she did volunteer work with local children.

According to Rawhani - who conducted the experiment to see if people in her community were racist towards minority groups - she noticed that people actually treated her more kindly and with more respect than when she didn't wear the hijab. 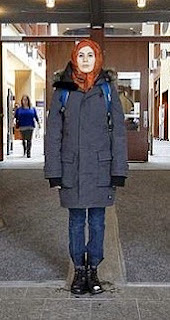 Rawhani, who is not Muslim, wrote about her experience wearing traditional Muslim clothing in the March edition of the Queen's Journal, where she works as a copy editor - the article is titled 'Overt to Covert.'

'At first I thought I was just imagining things. There's no way this is actually happening,' Rawhani told the Whig.com.

'I went with my hijab and people were very nice, people were polite, parents would shake my hand, so the experience was all across the board in Kingston.'

In some cases, she says, she would go out with friends who weren't wearing any identifying religious symbols and she was treated much nicer than they were.

'There was this excess (of niceness) that I would experience that I couldn't account for,' she said. 'Like really going the extra mile like smiling broadly and being so so polite, which I've never experienced before. It was a stark contrast that was going on that threw me for a loop.'