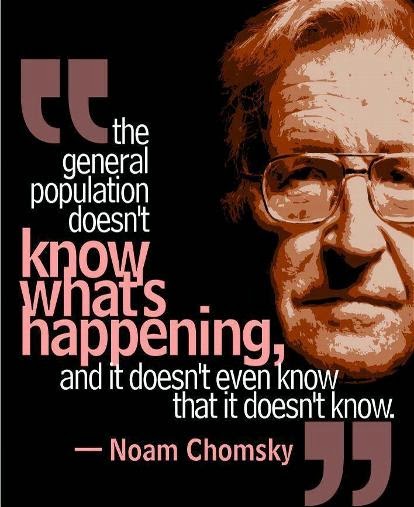 Apparently a Christian apologist wants me reported for supporting terrorism whilst another is falsely accusing me of 'supporting terrorism', all based on a post featuring Asghar Bukhari's very true assertion that Al Qaeda murder people because of foreign policy. Now, how in the world is that supporting terrorism? The right wing give us fanciful nonsense that Al Qaeda murder people because of Islam (despite Islamic Law FORBIDDING terrorism) yet when a Muslim offers a bit of balance and says actually Islam has nothing to do with 9.11 but Western Foreign policy is what motivates these alQaeda terrorists to murder then there's a bunch of right wing Christians who are calling you a terrorist supporter. Illogical!

I've got news for these folk, Norm Chomsky is saying pretty much the same thing - Western foreign policy is at the centre of anti-American feeling amongst Muslims. Do you want to report Norm Chomsky as a terrorist for simply speaking some sense which happens to expose right-wing propaganda?

Someone should report him to the authorities for supporting terrorism.
Perhaps Keith did not actually read my material and was simply swayed by a David Wood lie about me.

Whatever the case may be, I invite Keith to have a rethink. Disassociate yourself from negative people, Keith. I also invite you to look into matters more deeply. There has to be a reason why all of a sudden a bunch of terrorists have popped up and began to murder us - yes, I say us as they are killing British and American Muslims in their indiscriminate bombings.

Terrorism should never be supported but we should also never falsely accuse anybody of supporting terrorism. Both are wrong.

Thousands of Muslims have attended a peace conference in London which has condemned terrorism.

The conference launched a campaign to get one million people to sign an online declaration of peace by 2012.

Dr Muhammad Tahir-ul-Qadri said the conference would send a message that 10 years of extremist activity should end.

Dr Tahir-ul-Qadri is the founder of Minhaj-ul-Quran and gave the keynote speech at the event, despite having received death threats after issuing a fatwa - or religious ruling - against terrorism last year.

One of the sources of Islamophobia and Judeophobia is the selective quoting of religious passages that, either taken out of their literal context or without the context of how they have been interpreted, suggest that the adherents of Islam and Judaism repeat and harbor seemingly harsh views. When the literal context is missing, sometimes just referring to the preceding or following verses is sufficient to counter any misconceptions and let a stereotype go. In other instances, the religions’ oral traditions may help elucidate how adherents read those verses.

Video: Syria rebels may have U.S.-made antitank missiles There is no reason why this shouldn’t be true. We know that Obama has given advanced weapons to the Syrian jihadists. Let’s consider for a moment the consequences of giving advanced 21st-century weaponry to seventh-century savages who are hellbent on destroying 21st-century civilization. -