Sam shamoun continuously conflates some people’s disinterest in debating him as a weakness of their position. That’s faulty logic. I’d love for Sam Shamoun to go defend his religion by debating Bart Ehrman, yeah the same guy who has slaughtered Christian apologists for a living as of late—including the master debater James White. This isn’t a matter of opinion, the debates are on youtube, anyone can see them, I was humiliated for Mike Lacuna [Licona], and felt sorry for James white in their debates with Ehrman—especially during the cross examination. Mind you, debating is a skill, which does NOT necessarily equate with the truth inherent to the premise being debated. Debating is a matter of being articulate, and presenting your case in a manner which the audience finds more plausible and to that end, some people are more skilled than others; some can turn a lie into truth and truth into a lie, all by their ability to speak—this is always demonstrated in the life of an average lawyer. 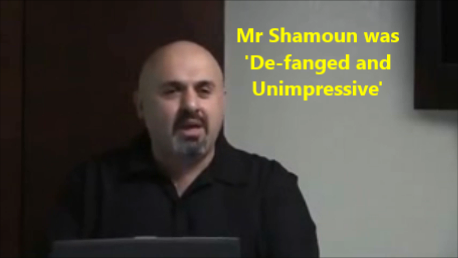 I know Sam’s style of debating, he relies on the vastness of Islam and the very fact that the prophet Mohammad, peace be upon him, was not just a spiritual leader with a short lived career, who spoke in abstract spiritual manner, i.e. Jesus. He was a man whose entire life was written down, his opinions on everything, every facet and aspect and angle of life. The vastness of the Islamic sources makes it difficult for an average or even a very skilled Muslim debater to keep track of every hadith and history document written on the life of the prophet. It becomes a laborious and impossible chore for the likes of Bassam Zawadi or Sami Zaatari or Ijaz Ahmad, etc. to find themselves in a debate and have an answer to the massive collection of hadiths, or any documents relevant to Islam, that Sam and his circus of clowns have collected. Imagine if Jesus had a ministry lasting decades, as oppose to 3 years, and he freely expressed his opinion on every aspect of life, imagine if there were thousands of narrations, and historical documents, some true, some forged, some true but contained weak links, some downright false, etc. It’s easy to defend a character who has left nothing but some anonymous gospels written about his incredibly short ministry. Because Christianity is a deficient religion, it does not seek to answer the many questions raised in the minds of its adherents, it isn’t a complete guide for any human beings life, it’s an impractical fable, which no Christian even follows—Please mention to me a Christian nation which follows the ever beloved and sacrosanct saying of Jesus of “Turn the other cheek”. They will not, because it makes no practical sense to do so. Were it not for the old Testament, Christianity would have little value than an average Aesop’s fable. So, Sam that is why people are hesitant to debate you, because your style boils down to the following 1. Collect as many sources as you find objectionable and can potentially deride and mock. 2. It takes no knowledge to object and deride anything, but a vast amount of knowledge to refute that objection raised. 3. Corner your opponent because he has never encountered that “hadith” or historical source—mind you, that hadith could be weak, a forgery, and the historical account, just a false account. 4. Claim Islam is false and you have won the debate. Sam you only debated one time in a formal debate with a Muslim of any scholarly merit, Shabir Ally, and you seemed rather defanged and unimpressive.

And for those who want to see my interactions with Sam Shamoun, see here
Posted by Yahya Snow at 12:46