Recently Nabeel Qureshi declined to defend David Wood's Islamophobia. The scholarly Ali Ataie has denounced David Wood in no uncertain terms. We have learnt James White through his conversation with Ijaz Ahmad of Calling Christians has rebuked Sam Shamoun for his tone and abusive comments. We know Negeen Mayel left David Wood and denounced him as self-radicalised. We also know that David Wood's friend, a professional in psychology, has said this about Sam Shamoun in the past:

Is there anybody with any credibility willing to defend these two Islamophobic Christian hate-preachers? It doesn't seem so. Quite telling! 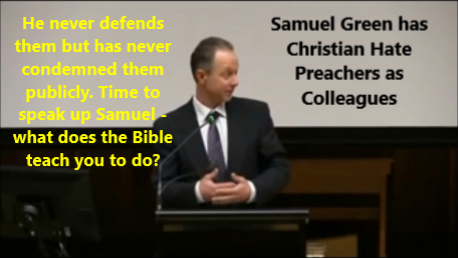 Well let's put it to another test in the form of Samuel Green. Samuel Green is a pastor. You'd think a pastor would not support the abuse and hate-preaching of Shamoun and Wood.

Recently, Sam Shamoun upon reading this post for some inexplicable reason sent a group hate email directed to myself and his fellow Christian (Minoria). Amongst the addressees of this malicious email was pastor Samuel Green. Now, I have spoken to pastor Samuel Green in the past and highlighted the anti-Christian actions of David Wood and Sam Shamoun. Guess what? Pastor Samuel Green has NEVER defended them. That's quite telling, don't you think?

Pastor Samuel Green was witness to an email insulting myself and a Christian who goes by the name of Minoria. The email by Shamoun contained insults against Islam. I shall not reproduce the email but those interested can contact pastor Samuel Green to verify such a hate email was sent.

I will allow pastor Samuel Green 5 days to decide whether he condones such emailing by David Wood and Sam Shamoun. From my experience with pastor Samuel Green his silence is quite deafening - whenever he cannot support something he remains silent. I predict silence.

'I Got Money on My Mind'

Christian Islamophobes, how do you get these folk to stop embarrassing themselves and their church? You stop giving them money!

Surely you would rather give money to starving children in Africa than to a couple of internet Christian hate-preachers who don't seem to have real jobs.

Oh another thing, these two characters don't even seem to be versed in Christianity so why in the world are Islamophobic Christians giving them money over starving children in Africa?


The irony is, Sam's abuse comments also contained the claim of myself seeking his/'their' attention. Which is interesting considering I received this comment offering me advice:

It's ironic the bloke tries to use me to revive his career and grab a few crumbs of attention. 2/3/4 years ago (however long ago it was!) he was crying out for attention, he got it from me. The result? Well the result is a ton of videos disseminated over the internet showing him to be a dishonest, unscholarly and unworthy man - not to mention all those blog posts.

Of course, I don't for one minute expect Nabeel, Samuel or even James to come out and support the hate preaching and abuse by Dave and Sam. You're all alone boys. Nobody with an ounce of rationalism, sincerity and knowledge of the Bible will support you per se.

I call you away from Islamophobia. Think about it, when mental health professionals are opining that you may be 'bi-polar' you should recognise Isamophobia is doing nothing for your character development. Sure, you may have a few dollars in the bank account from the gullible and equally hateful Islamophobes on the net but are you really going to continue selling your characters and mental health for a few dollars?

Get a job guys. Trust me, you feel better once you get out there with the rest of the normal folk.

Sam Shamoun: A Disgrace To Christians


I am writing this brief note to simply let Muslims know that not all Christians have filthy manners like Sam Shamoun. Sam Shamoun does not exhibit the character of a true Christian believer. I have to be honest and admit this, for it won't be fair to portray a wrong image of Christians based on this ill mannered man.


Recently I came across email exchanges that took place between Jalal Abualrab and the Christian missionary Sam Shamoun. I have heard that the missionary Shamoun is a very abusive, malicious and nasty individual, constantly mocking and abusing Islam as his hobby. After reading the mail exchanges, it became clear to me that this missionary is indeed a very arrogant and abusive person. I was surprised to see that Katz, who generally maintains a polite tone, did not say a word to condemn Shamoun’s abusive behaviour.

In this paper I would like to comment upon the discussion and offer my own perspective, views and observations as a reader.

Sam Shamoun is a polemical writer for the Answering Islam website, particularly well known for his chaotic behaviour. For example see:
•Answering Islam?s sincere apology REJECTED by Nadir Ahmed.
The missionary apologised to Nadir Ahmed for being insultive, rude and abusive in his e-mails. He wrote “It was wrong of me to insult and ridicule Nadir, his prophet and his religion. I need to debate and evangelize with a more respectful attitude towards those I disagree with.” However, shortly after submitting this apology, and admitting that he had been quite abusive, the missionary was caught on Paltalk defending the abusive conduct of a fellow Christian who was being insultive towards Muslims and using foul language. Interestingly, he used the example of Jesus to justify being abusive towards Muslims: “Even the Lord Jesus was harsh and cruel to people who disserved it because of their stiff neck sinful pride blasphemous ways? (applicable to Muslims today)”
•He does not know how to conduct a proper polite discussion. For example, see his conversation with Nadir Ahmed on Paltalk.
•More recently, Sami Zaatri of Answering Christianity has published some emails sent to him by Shamoun as well as commented upon his demeaning behaviour in general: ◦Examining Sam Shamoun’s character
◦Examining Sam Shamoun’s character – Part II
◦Examining Sam Shamoun?s character – Part III
◦Sam Shamoun’s bad and foul manners exposed – Shamoun simply abuses Sami and sends cheapish insultive comments.
◦Examining Sam Shamoun’s Character – Part 5 – Make sure to read these e-mails. Not only does the missionary insult Sami, he even has a go at his mother, at Islam, Prophet Muhammed (P), firing away one abusive and sneerful comment after another. Remember these are completely unprovoked barages of slurs, sneers, scorns, mocks, insults and abuses.


Answering Islam seem to have been quite embarrassed and thus they had at first falsely accused Sami of making up the e-mails, but later had to acknowledge that the e-mails were indeed authentic. But I wonder why they were “shocked” to think that Shamoun could not be responsible for such foul emails? Did they so quickly “forget” the phony apology issued by Shamoun some time ago precisely for being extremely abusive?

sams been like that for years. Christians r embarrassed by him. don't know how he makes any money in donations. shabir ally don't take him seriously. don't waste too much time wiv him. he hates sami zataari, bassam zawadi, paul Williams, shabir ally as well. sam is lost.