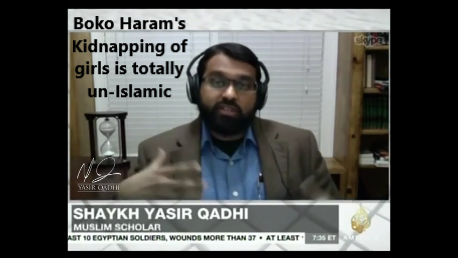 This is so devious and deceptive. A Nigerian group of terrorist, Boko Haram, kidnap over 200 school girls and a bunch of Islamophobes (people who hate Islam) are using such crimes to attack Muslims and Islam!

You see, normal people will be concerned about the Nigerian girls and praying for their safe return. Nope, not these Islamophobes - these folk are not normal. These Islamophobes decide to use the misery of these girls to attack Muslims and Islam. How pathetic and debauched!

One radicalized American Christian hate-preacher is misusing the suffering of these poor Nigerian school girls and DECEPTIVELY claiming that the Quran allows the capturing and raping of girls in his attempts to hate-monger against Islam.

What type of hate juice is this American Christian hate-preacher on? He seems to really think that Islam allows the Boko Haram style abductions of school girls. What the?!

I'd like to remind this Christian hate preacher that a reputed Muslim scholar, Dr Yasir Qadhi, has already stated that the kidnappings by Boko Haram are 'totally un-Islamic'.

My message to the American Christian Hater: Next time don't make stuff up. Next time don't misuse the suffering of victims for your agenda of hatred against Islam and Muslims. Try to have a lie down and rethink your life.

Oh another note for the Islamophobe, Boko Haram has already been condemned by a Muslim scholar in the past before this kidnapping outrage.

May Allah protect these girls and make them return home safely. Ameen.

Here's part of a news report on the kidnappings:

Mothers marched Wednesday in Nigeria to protest government inaction more than two weeks after 200 school girls were kidnapped by Boko Haram, a terror group operating with near impunity in the region — and which has reportedly sold many of the girls into slavery or marriage for as little as $12. 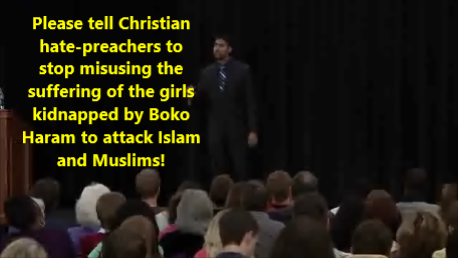 The rally came on the same day that the U.S. State Department released its annual global terrorism report, which names Boko Haram as one of the most dangerous groups in the world — ranking next to the Taliban in Afghanistan and al-Qaeda factions in Iraq and the Arabian Peninsula — and said they the group was responsible for at least 1,000 deaths in 2013.

"Boko Haram" translates to "Western Education is Sinful," so it has been attacking Nigerian schools since its founding in the early 2000s. But the April 14 attack at the Government Girls Secondary School in the Nigerian town of Chibok sent shocks around the world: More than 200 girls were taken, and weeks later it's still unclear where they are.


The girls' identities have been withheld by the Nigerian government, which cites security concerns.

"We know little about the girls except they were in the highest class of secondary school in Nigeria," said Segun. "Most of them are between the ages of 16 and 18 years old."

According to community leaders in Nigeria, the young women are being forced to marry the Islamic extremists who kidnapped them.

The students are being sold for 2,000 naira — about $12 — to marry the fighters, Halite Aliyu of the Borno-Yobe People's Forum told The Associated Press in Lagos.

She said reports of mass weddings are coming from villagers in the Sambisa Forest, on Nigeria's border with Cameroon, where Boko Haram is known to have hideouts.

"The latest reports are that they have been taken across the borders, some to Cameroon and Chad," Aliyu said.

Pogu Bitrus, a community elder in Chibok, the town where the girls were abducted, told the BBC that some of the girls "have been married off to insurgents [in] a medieval kind of slavery."

"You go and capture women and then sell them off," he said.
Muslims against horrific attacks on Nigerian Christians - Imam Mohamed Magid

There is more about Bokoharam we dont know.

The Borno state first Lady has embarked on the same protest in Chibok this morning. After refusing to show up for the meeting called by first lady.

WAEC presented correspondences between them and the school to presidency. They told the school not to hold exams for those girls raising security concerns. The school replied that they have gotten clearance from the state government that they will provide security. At this point, WAEC had to agree. Where were the security men when those bloody idiots showed up to cart away those innocent girls. There is more we dont know.


Suspected Boko Haram sect, today, launched an attack on a Cameroon Gendarmes barracks and killed two personnel in a gun duel in the Northern part of the country. A Cameroonian journalist told SaharaReporters that the militants carried out the attack in the barracks located in Kousseri town.

The Boko Haram insurgents after killing two security personnel freed two of their high profile fighters being held in the barracks detention facility.

The source said that the country’s military are presently strategizing on waging a war on the insurgents operating around its border with Nigeria.

In another development, Nigerian troops this morning had a serious confrontation with the sect militants around the Nigerian border with the Republic of Chad.

A military source in Borno State confirmed the story to SaharaReporters, he did not provide further details.

Summarily, national and global protests are good, the Twitter channel dedicated to this campaign is applaudable, the tears that have been shed by the politician be it genuine or mere crocodile tears must be hailed for efforts but unfortunately, these are the minimum. There is the need to tell ourselves the truths are; the kidnap was avoidable and the rescue of these girls is possible. Their captors, the insurgents have lives, families and loved ones, our intelligent community needs to start working on their traceable links if they would ever prove to be intelligent. A greater and better level of intelligence gathering would see these girls rescued with little risks. Rescue operations have been undertaken in the past, no lest by the US, our very public allies.

Another truth is that rash actions may trigger the massacre of the surviving girls and put out the faint light at the end of the tunnel, street protests and political tirades must take note of this fact too. Another truism is that there is need for empathy cutting across different social strata and ethnicities.