It's reported that an attack took place on a bus full of Jewish schoolgirls. If this attack did actually occur it's important to denounce it. The right wing media like to use the misery of the victims of terrorism for their agenda of foreign intervention and demonization of Muslims. They really don't seem to care about the victims. We have already seen that Sharia does NOT allow terrorism so it's important for Muslims and Non-Muslims to avail themselves of this important information.

In all honesty, stories of Muslims attacking innocent people through terrorism should shock people as Islam does not allow such acts. On top of this, to attack school girls should be even more surprising especially considering the high regard Muslims hold females in - in fact a Muslim country recently was ranked best in respecting women. 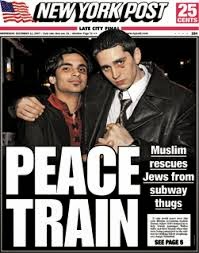 Not only that, it could be useful to remind the insincere right wing (may of whom are right wing Christians) who are busying themselves in hate-preaching against Muslims that persecution was justified by St Augustine as well as John Calvin's support for executing blasphemers and heretics.

Snip from the story about the terrorist attack:

Four terrorists hurl firebombs at bus near Hevron, engulfing it in flames, but media ignores story, preferring to cover Jewish graffiti. A well-planned firebomb attack on a bus full of Jewish schoolgirls Tuesday could easily have ended in tragedy, but no news source even reported that it took place, except for the one you are currently reading – Arutz Sheva. The girls were sixth-graders from a religious school in central Israel. They were on a bat mitzva tour of the Cave of Machpela in Hevron, a site recognized by the government as an official heritage site, when four terrorists ambushed it with firebombs.  [source]